“My role as an artist is to discipline the chaos regarding information.”

Abraham Palatnik:Progression highlights the creative junctures of art, nature, and industry central to the work of this pioneer of kinetic art. Palatnik’s progressions, or progressive reliefs, enmesh organic and inorganic forms with technological invention in oeuvres of controlled semiotic and visual lyricism.

Considering the representational function of art to be exhausted, Palatnik turned away from figurative representation to embrace movement, science, and radical configurations of form via his renowned kinechromatic devices. After experiments with light and movement, he received critical acclaim for his Aparelho Cinecromático [Kinechromatic Device], during the 1st São Paulo Biennial (1951). Mário Pedrosa embraced and invented the title for the work, and the artist entered into the vanguard Grupo Frente. From the mid-60s on, Palatnik has dedicated his production to objects focused on internal mechanics and light manipulation, such as Objeto Cinético C-15, where line, shadow, and motorized movement construct a poetic visual interplay.

Palatnik’s progressions represent a shift away from the artist’s investigations with light and color-filled kinechromatic devices. Artworks such as Progressão 66-A provide striking emphasis on organic– rather than solely industrial– materials. The pieces consist of substances such as cardboard, resin, and in particular, wood veneers. The artist first developed his progressions while working in furniture production, when he became aware of the optical-kinetic possibilities of native hardwoods, such as jacarandas. Recuperating wood shavings from the furniture joiner, Palatnik strategically intervenes in their patterns via the meticulous application of incisions, displacement, and acrylics in progressive experimentation with the material over time. Painted pieces, such as W-482, convey an aesthetic energy in their linear complexity that responds intimately to their substance itself. The artist’s progressions discipline sensory patterns of undulating lines and forms, reconfiguring them into works permeated by their own material essence by way of precise, technical interventions.

The relationship of the organic, the inorganic, and the technical in these progressions establish a lyrical association between materiality and movement. By tempering the flux of information inherent in the figurative within the framework of technology, Palatnik’s progressions transform image and movement into visual prose.

“My role as an artist is to discipline the chaos regarding information.” 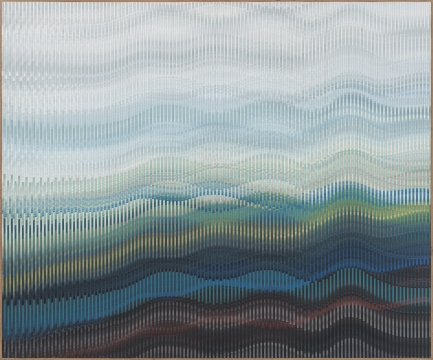