“Some rivers in Colombia have been, in their silent course, witnesses to a history that we reiterate tirelessly: an endless flow of all that we attempt to redress or amend…”

Innovatively merging image and sound, Sicardi Gallery is proud to present the striking work of Colombian artist, Clemencia Echeverri, in her first solo exhibition at the gallery, Sin Cielo (Skyless). Originally trained as a painter and sculptor, Echeverri turned to video and sound in the late 90s, honing her skills to create evocative, immersive environments to critique the isolation, lack of infrastructure and unchecked violence of criminal or environmental nature in her homeland. The pieces spotlighted in the upcoming Sicardi exhibition belong to a larger body of research by the artist, which addresses the endless flow of illicit issues afflicting Colombia.

The exhibition includes two photographs from the series Treno (2007) and a single-channel video Sin Cielo (2016). In these pieces, the river serves as a literal and metaphorical device. While Treno presents the river both as site and witness to unchecked violence, Sin Cielo observes its role as a vehicle for unregulated toxins. Echeverri’s juxtaposition of riverine audio-visual elements carries undercurrents of absence, ruin and ritual associated with the experience of corruption and exploitation in contemporary Colombia.

Echeverri received a Masters in Sculpture at the Chelsea College of Art and Design in London and a Masters in Visual Arts at Universidad de Antioquia in Medellín. She received an undergraduate degree in Visual Communication from the Universidad Pontificia Bolivariana in Medellín. Echeverri has received numerous awards, including the Premio Biennial de Artes Plasticas for Treno, in 2010. Her work has been exhibited internationally, in venues such as the Museo de Arte Moderno de Barranquilla, Colombia; the Art Museum of the Americas in Washington, DC; The Museum of Contemporary Art Conde Duque in Madrid, Spain; Daros Latinamerica and CENART México DF, among others. Her creative output has been the focus of the recent monograph, “Sin Respuesta”: La obra de Clemencia Echeverri 1995-2010, produced by the Universidad Nacional de Colombia.

For more information, contact Mónica A. Hernandez Goins at monica@sicardi.com, or call 713.529.1313.

Download PDF
“Some rivers in Colombia have been, in their silent course, witnesses to a history that we reiterate tirelessly: an endless flow of all that we attempt to redress or amend…” 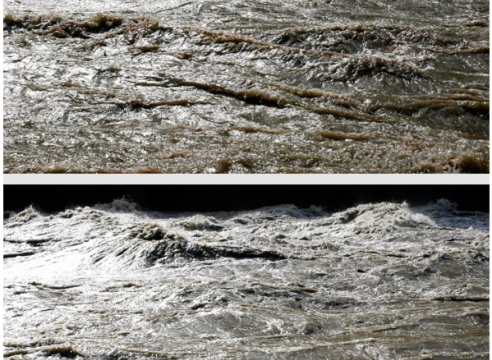