In 1915, at a turbulent moment that never evolved into the proletarian utopia that many hoped was on the horizon, Kazimir Malevich painted a realist picture of a boy with a knapsack. Or perhaps better to say, he redefined the real as pure form, for all one finds is a larger and imperfect black square and a smaller (just about perfect) red square upon a broad (almost) white field. Malevich proudly announced that he had “destroyed the ring of the horizon and escaped from the circle of things, from the horizon-ring that confines the artist and forms of nature.” To a contemporary ear, this might sound like some heroic ordeal in a neo-medieval HBO drama, though the Russian’s inspiration may have been more Wagnerian, and his intention was serious.

The two quadrilaterals exist on the flat surface of the canvas, as artificial a space as could be. There is no boy and no knapsack, of course, though the black square does seem to be doing all the heavy lifting, rooted in place to keep that red block from tilting any further. Whether an inside joke or an aggressive attempt to épater le bourgeois, Malevich’s complex title—which reads, in full, Painterly Realism of a Boy with a Knapsack - Color Masses in the Fourth Dimension—was both description and manifesto, and long explanations are common, as we all know, in times of revolutionary change, in euphoric moments of liberation.

Fanny Sanín’s Acrylic No. 2, 2015 was painted exactly a century later, at the apogee of a long and focused career-journey that has taken her from Bogotá to New York, by way of Champaign-Urbana, Monterrey, and London.

Absolutely coincidentally, there are black and red forms in this work, now accompanied by other “color masses,” sandwiched and balanced, juxtaposed and stacked, elongated and reduced, measured and marked. There is no white “background” at all, and the red and the black are here pushed to the margins by orange, sand, and wine, colors generally harder to define or label with the same precision with which they are placed on the canvas. Sanín’s title includes no elusive description, no hint of a manifesto, no poetry or mythology or metaphor, but just a convention she has maintained since the 1960s: materiality, first and foremost, and then serial order, here to tell us only that it was the second painted in a given year. Her cool, scientific categorization system shuts down critical or personal ruminations even more than the open-ended Untitled (meaning we don’t have a title) or Untitled (meaning the artist so titled the work), which release upon us a Pandora’s box of possibilities.

In these elegant and energetic—at times surprisingly explosive—canvases of the past quarter century, Fanny Sanín, now in her eighties, reveals an enviable confidence, authority, and control, like that of an older musician or conductor who never trembles or misses a beat, or an emeritus mathematician whose calculations result from insights hidden to the young and impetuous scholar (the comparisons to math and music here are purposeful and biographic). And as with those disciplines—such a revealing term—mundane references to observed reality, to the “circle of things,” as to boys and knapsacks, can only be distracting, and maybe just a bit ridiculous. What’s there is there. 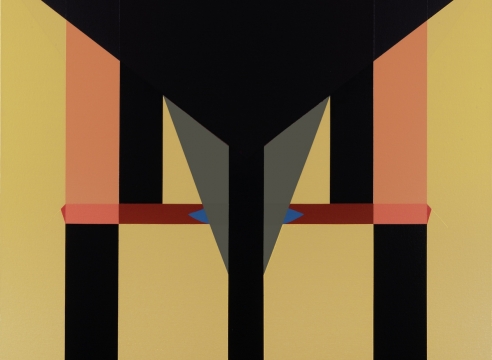