Crystals of Inevidence, by Willy Kautz

Throughout his artistic career, Gabriel de la Mora has studied the history of constructive art and in particular the relationship between monochrome and image. Crystals of Inevidence displays a series of visual games from the organization of coverslips -an industrial and monochromatic artifact- over two-dimensional monochromatic surfaces. Through this aesthetic process, the objects used in clinical labs for empirical examination, take on a symbolic character. What from an objective perception seems at first glance as a retinal experience of the artistic piece unexpectedly reveals what the transparency is hiding. What at first glance seems as a retinal experience from an objective point of view unexpectedly reveals what the transparency is hiding.

The parade of shadows and color displayed by this series of thirteen, refers us to a modernist monochrome tradition, while the organization of the objects reveal a geometric composition that shifts depending on the light and the position of the spectator. In this regard, the systematic organization of translucent objects and monochromes over two-dimensional planes unhide the non-obvious through modular structures and light contrasts. In this configuration plot, the placement of both the piece and the spectator give access to a sensory experience that gives way to an unrealistic phenomenon.

Unlike scientific proof, which consists on the rationalization of evidence, the work of Gabriel de la Mora focuses on the opposite: the disappearance of the objectual literality of minimalism into an optical conspiracy. These schematic manifestations that at a distance look like atmospheres drawn on the surface, are visual structures on which transparent objects hide in webs woven by their own shadows and light reflections. They appear and disappear, they show themselves only to hide later, as the piece is mounted, transferred and removed.

The use of prefabricated objects in the art of Gabriel de la Mora is consistent with the ready-made technique and the literality of minimalism. In this sense, objects are used as a physical presence, an aesthetic resource for the unveiling and disappearance. Thus, their functional sense is redesigned in the visual sensuality of shifting and ephemeral modular shapes. What we see is not what we really saw, since the evidence of its appearance is a ghostly phenomenon. The organizational rationality of this selection of thirteen pieces is clear testimony of the way in which de la Mora interweaves an aesthetic link to the history of constructive shapes, apparently functional and evident, in order to hold an imperceptible sensory space whose symbolic potential lies in its inevitable disappearance.

Unlike an opaque object, a translucent object reveals its interior. When such transparency shows the inevident, meaning a geometric ephemeral presence, there is a poetic opening in which vision is able to meet the sensory field of the imperceptible. This aesthetic allows for a review of the constructive forms where the objectual is displayed as a three-dimensional illusion on a plane. The inevidence is decanted as a shape molded by the emptiness, a haptic emptiness accessible to all the senses. The vision invites the spectator to take a look inside the crystals to be part of an illusory trap and to experience the appearance of the inevident. The shift between translucent objectuality and illusory projection gives way to a pendulous visuality in which the transparency of the object appears as an optical figuration that, far from the trompe-l’oeil, originates from the direct relationship with what is real. This scheme of illusory appearance unhides monochrome reticles as geometric spectra. With the Crystals of Inevidence series, de la Mora places a bet on the surface for the decryption of a constructivist functionality that is revealed, paradoxically, from the monochromatic transparency. 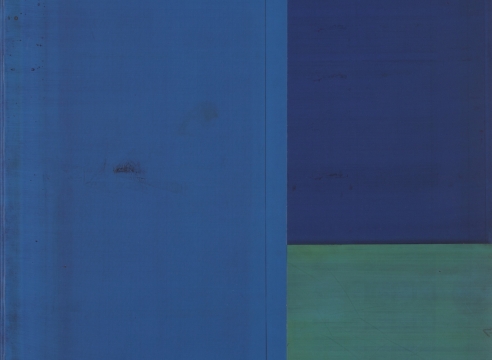