Traversing the art of Gustavo Diaz

Addressing both the intimate and the infinite, Gustavo Diaz’s works involve thinking on and through paper, demonstrating a rigorous and multifaceted engagement with his primary medium. Seemingly miraculous in their microscopic scale and rich detail, the artist’s works involve hundreds of hours of production. He uses computers and laser-cutting machines, yet his interactions with these technologies are more analogue in approach than digital. While the patterns visible in these works appear computer generated, they are all meticulously drawn “by hand” (using a computer’s mouse). The artist specifically defies the seduction of multiplicity and algorithmically generated forms that computer programs currently promote, preferring a more meditative and manually exhaustive process. With the laser cutting machines, their ability to cut paper to a minuscule degree is of particular interest in producing a scale that forces the viewer’s close reception of them. It is additionally the fact that the machines are burning the paper to create lines and shapes that attracts the artist, as it represents a contemporary manifestation of the ancient use of fire as a tool for mark-making.

The artist’s particular lived experience informs these artworks. At the age of twenty-seven, after studying engineering, fine arts and musical composition, Diaz moved to Cariló, several hours from Buenos Aires. At the time this area was extremely isolated and the artist moved there to study in solitude, pursuing diverse investigations related to philosophy, natural science, physics, literature, sound and drawing. He built by hand his own house and stayed living in this area for the next twenty years before relocating to Houston. The landscape of Cariló is both austere and full of texture and detail, as tall pine trees give way to wide sand dunes and unobstructed views of surf and the sea’s horizon. One senses that this context has deeply influenced the artist’s practice, the extended experience of physical isolation, combined with deep contemplation and intellectual activation, occurring in dialogue with the specific visual qualities of the landscape in which these investigations took place. It helps create an understanding of this work’s unique ability to feel so close and so far at the same time, with the seemingly endless and expanding repetition of its textured, minute details quickly moving one’s mind toward more vast, expansive fields of contemplation.

Nests, bark, coral, mushrooms, stones; the linear patterns of these natural elements are references in many of the artist’s works and help ground our reception of them in the tangible. Yet it would be an oversimplification to tie these works solely to landscape and the natural world. Rather, here one might come to understand natural forms as far less simple in organization than one normally accepts. In discussing his works, Diaz at times mentions nature, but more often speaks of generative systems and their disruption, of theories of chaos interconnecting with those of catastrophe, of disjunctive logics placed in dialogue. These ideas are often formally translated through conflicting stylistic patterning visible within an individual work. Looking intently, the viewer can often see fluid, irregular and natural looking configurations intersected by geometric forms that appear more traditionally architectonic and mathematical.

In his process of articulating a particular artistic investigation, Diaz often turns to the physical presentation of layered and overlapping books, which he refers to as non-linear “semantic constellations.” While dense and initially difficult to grasp, these presentations are useful tools in deciphering the divergent roots of the artist’s rhizomatic thought processes. Related to the works in the current exhibition, one sees, for example, several works by Argentine writer Jorge Luis Borges placed under those of the North American composer John Cage, near a book by the mathematician and analytical philosopher Kurt Gödel. Several publications on the topic of “Fuzzy Logic” lie near “Granular Patterns,” adjacent to “Particle Physics” and “An Introduction to String Theory and D-brane Dynamics.” These are juxtaposed with “Branches,” by the British science writer Philip Ball and “In Praise of Shadows,” by the Japanese writer Junichiro Tanizaki. With Diaz’s three-dimensional diagrams, an initial layer of books is often followed by additional layers, as his thinking evolves with a given project.

With the title of his current exhibition, Incompletitud: La poetica de lo intangible

Diaz alludes to the “incompleteness theorem” by Kurt Gödel, originally published in 1931, in which the mathematician articulates the idea that for any law or logic to be “complete” it must contain within it its own contradiction. His thinking, based in science but more philosophical or even existential in character, implies that we are all in fact incomplete and only within our own contradictions might we approach a sense of wholeness. Diaz combines this reference with those of the “intangible,” which addresses his consistent experimentation with the limits of materiality, often pushing the structure of paper close to the point of disintegration.

Constelación semantica aproximada: Argumentación diagonal sobre conjuntos rudos, la nube y la hormigais the title of a series of works with paper that represent experimental investigations by the artist that have served as generative sources for other artworks in the exhibition. These tiny paper pieces, whose gray and brown tones are created by the laser burning process, look like hives, branches, or bones. In the production of each of these sequences Diaz initially looks for what he calls an “event,” which might be a certain texture in the paper, or a small tear, that is then multiplied, made into a system that creates a pattern, which he in turn manipulates and often later degenerates. For the artist this series of works is distinctly analytical and conceptual, lacking significant poetic content, which pushed him to then take these studies and create a second body of work in which he layers symbolic content onto these structures.

The resulting series is titled El rozamiento de la incertidumbreand includes eighteen paper pieces, divided into seven groupings and a sound composition of 23 minutes. Each cluster has been given a title, such as “The birth of night,” “Algorithm of fire,” or “The intelligence of flowers.” These seven sections refer to both the drawings and passages within the accompanying sound piece. Diaz understands his sound works as structured similarly to that of his drawings, filled with patterns, textures, varying depths and layers. Jorge Luis Borges enters this series as one poetic referent, as does John Cage. Specifically Diaz is reflecting on a Borges text "The Fearful Sphere of Pascal" and with Cage a series of sound works and drawings based on the composer’s experience of the Japanese rock garden Ryoanjiin Kyoto. He is inspired by the innovative structure and particular magic of Borges’ writing and with this text in particular, to the writer’s articulation of time and history as non-linear and existing as metaphors. Cage’s explorations of this Zen garden incorporated chance and improvisation as he used the fifteen rocks of this garden as lose structural elements, in an ever-changing group of pieces described as “compositions-in-progress.” These two sources are extremely different, creating an unusual juxtaposition, with the text by Borges heavy with historical references contrasting significantly with the lightness and minimal character of Cage’s pieces. But it is specifically the distance between these two aesthetic positions that interests Diaz, the abstract space of potential meaning exiting between them, that he is exploring.

The multiple references to time and space addressed in this series are expanded upon within additional works produced for the exhibition, as are the unusual play with shadows seen here as well, gestures influenced by Junichiro Tanizaki’s meditations on light and darkness within Japanese aesthetics. Strong color enters in several spherical drawings, for the first time in many years within Diaz’s oeuvre. The specific vibrant reds and warm yellows used are derived from tones discovered within the laser burning process and are painted meticulously by hand by the artist.

Arquitectura de murmullo is an ambitious work that includes a twenty-seven minute sound piece involving thirty-six speakers accompanied by thirty-six works on paper. The audio is built around a series of seven to twelve clusters of sound, constructions that float and overlap, creating strong dissonances that make the overall form of the composition difficult to discern. The theory of fuzzy logic by the mathematician Lotfi Zadeh, published in 1973, enters here as a structuring reference for Diaz. Zadeh’s ideas propose a way to manage uncertainty and develop models that are capable of interpreting data (here in the form of sound) that are imprecise or vague. Diaz’s references to floatation, suspension and structural complexity with sound are mirrored in physical form within the set of drawings. Architectonic paper constructions, that each display three-dimensional depth through the use of minute vertical columns that push their cut forms outward into space, are adhered to circular panels suspended from the ceiling. These discs are of different sizes and their positioning creates movement as they subtly turn, with their varying weights responding to gravity and the environment of the gallery. The rectilinear details of the paper pieces look like those of cities and recall the fantastical urban sites described by the Italian writer Italo Calvino in his book Invisible Cities. Assembled together Diaz’s cities create an enigmatic cosmology, a mental mapping of forms and ideas.

Both as objects and concepts, all of these works are concurrently delicate and heavy, both dense and fragile. Uncertainty, contradiction and additional expressions of imperfection and vulnerability within organizational systems are reoccurring themes throughout all of Diaz’s production. In each project’s embrace of precariousness one additionally senses the artist’s wrestling with the limits of physicality, materiality and the tangible, revealing his continual struggle with each artwork’s ability to hold and convey the extensive conceptual and poetic weight he places on them. 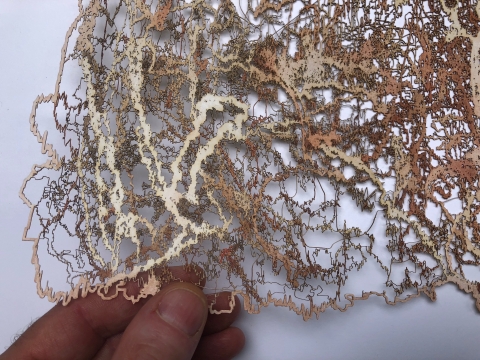