Sicardi Gallery is pleased to announce the opening of Dialogues, an exhibition of new sculptures and paintings by Marta Chilindron and Graciela Hasper. Both artists will be present for an opening reception, from 6-8 pm on Thursday, July 10.

In Dialogues, both artists explore geometry and transparency within their respective practices. Chilindron's brightly-colored acrylic sculptures range from 12-inch cubes to almost 6-foot high movable trapezoids and spirals. Hinged together, these works can be reconfigured into variations on each shape, creating an interactive conversation with the viewer. Hasper's untitled acrylic paintings on canvas also take geometry as their starting point. Overlapping and repeated shapes in a palette of bold colors are layered to allow for surprising juxtapositions and vibrant relationships between forms. Hasper's paintings, like Chilindron's sculptures, are not fixed in space; they can be installed vertically or horizontally, or changed over the course of the exhibition. Dialogues places these exquisite constructions and paintings in counterpoint with one another, pointing out their conceptual and aesthetic points of intersection.

Born in Buenos Aires, Marta Chilindron was raised in Montevideo and relocated to New York in 1969, where she attended the State University of New York in Old Westbury. She studied at the Camnitzer-Porter Studio in Valdottavo, Italy and in New York, with Julio Alpuy, an Uruguayan artist trained by Joaquín Torres-García. She completed numerous public works, some in collaboration with Eduardo Costa. In the late 1990s, Chilindron began making collapsible sculptures, using hinges to allow the objects to be moved and changed. For her 1999 solo exhibition at El Museo del Barrio in New York, she constructed an object that changed from flat plane to a three-dimensional structure that replicated movie theater seats and a screen. In 2000, Chilindron received a Joan Mitchell Foundation grant and began working with transparent materials. Her work has expanded to include the exploration of layered colors and moveable geometric forms. "I like to see all the sides of the work without walking around," she says. "You can stay still and walk with your mind around the works."

Graciela Hasper has followed a self-directed course of study in the arts, working with Diana Aisenberg between 1987 and 1991, and taking classes in philosophy and art history in her native city of Buenos Aires. In 1993, Hasper participated in an exhibition curated by Jorge Gumier Maier, Nicolás Guagnini, and Pablo Siquier, held at the Centro Cultural Rojas de Buenos Aires. Titled Crimen y Ornamento, the exhibition was one of the first to explicitly link the generation of 1990s artists in Buenos Aires with mid-century abstraction. “In Argentina, abstraction was repressed because it did not ‘explain’ national values. It had no value. So I adopted something that had no value and tried to make it valuable, an act of resistance. My work reflects the way a younger artist can respond to Madí, to the abstraction of the 1940s and 1950s,” Hasper observes. Since the 1990s, Hasper’s painting aesthetic has been clean and direct, marked by sharp orthogonal lines and bright color. In 2000, she completed her first residency in the United States, at Apex Art in New York with a Fulbright / FNA Grant. In 2002, she participated in the Chinati Foundation residency. Her most recent work has expanded to a larger scale, even encompassing architectural interventions. For her 2013 public project for the city of Buenos Aires at Museo de Arte Moderno de Buenos Aires (MAMBA), Nudo de Autopista, Hasper painted the columns of several intersecting knots of highways in Buenos Aires. 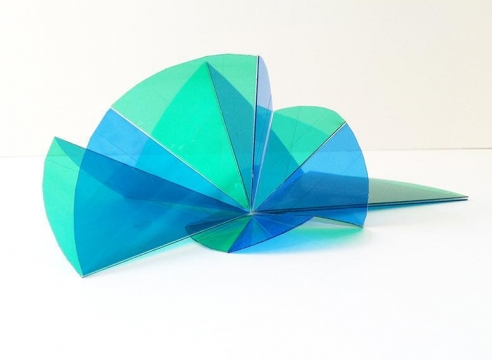 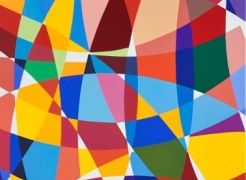