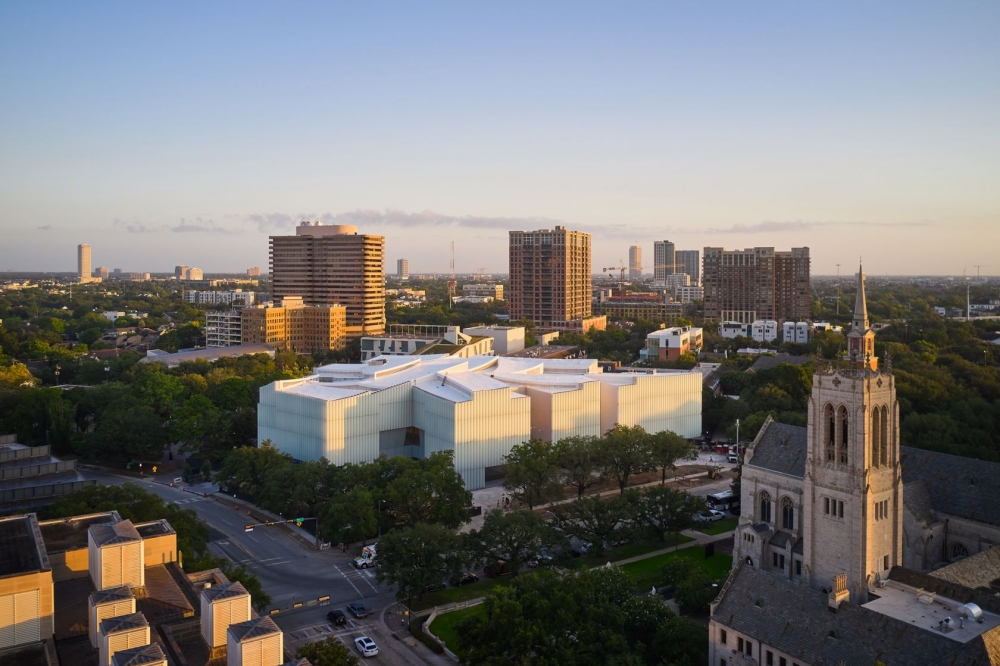 The Nancy and Rich Kinder Building at the Museum of Fine Arts, Houston, from above. Photo by Peter Molick / Thomas Kirk III

Opening to the Public Saturday, November 21

Dedicated to the Museum’s first comprehensive display of its international collections of modern and contemporary art, galleries span media from painting and sculpture to craft and design, video, and immersive installations

HOUSTON—September 15, 2020—Gary Tinterow, Director, the Margaret Alkek Williams Chair, the Museum of Fine Arts, Houston, today announced details of the installations that will be on view when the new Nancy and Rich Kinder Building opens to the public on Saturday, November 21, 2020. This date is adjusted from the originally forecast date of November 1, due to the effects of the pandemic, and recent hurricane preparations, on final construction work.

Designed by Steven Holl Architects as the third gallery building on the MFAH Susan and Fayez S. Sarofim Campus, the Kinder Building is dedicated to presenting works from the Museum’s international collections of modern and contemporary art. It will open with the first comprehensive installation of these works, drawn from the collections of Latin American and Latino art; photography; prints and drawings; decorative arts, craft, and design; and modern and contemporary art (Images available here). In celebration of the opening, the Museum will offer free general admission to all three of its Sarofim Campus gallery buildings for opening weekend, and to the Kinder Building through Wednesday, November 25.

Gary Tinterow said, “In the dynamic spaces that Steven Holl Architects has designed for the Nancy and Rich Kinder Building, our distinctive holdings of modern and contemporary art will soon have the showcase they deserve. This area of our collection continues to grow rapidly, thanks to the exceptional endowment for acquisitions provided by our donors, with the late Caroline Wiess Law at the forefront. We are thrilled that we can now present recent purchases and our historic acquisitions in depth and breadth, bringing our audiences a wealth of recognized masterpieces as well as discoveries by lesser-known artists.”

The Nancy and Rich Kinder Building contains both departmental and cross-departmental galleries. This approach will allow visitors to not only delve into the materials, geographies, and art forms in which modern and contemporary art have developed, but also to explore the ways in which varied artistic ideas, styles, and themes have transcended those boundaries. The multiple stories of modern and contemporary art-making are articulated throughout the building.

A flexible black-box gallery at the street-level entry of the Kinder Building will be permanently devoted to immersive installations. The three inaugural works will be The Hydrospatial City (1946–72), a hovering, utopian vision for an architecture in outer space by Argentinean artist Gyula Kosice; Caper, Salmon to White: Wedgework (2000), a light-filled environment by American artist James Turrell; and Aftermath of Obliteration of Eternity (2009), an Infinity Light Room by Japanese artist Yayoi Kusama. A windowed gallery facing Main Street on this level includes Lezart I (1989), a monumental configuration of embroidered silk, metal objects, and cast-metal lizards by Brazilian artist Tunga, adjacent to the Museum’s historic 1965 acquisition of kinetic sculptures by Swiss artist Jean Tinguely. Moon Dust (Apollo 17) (2009), an installation of suspended lights by American artist Spencer Finch, will hang in the café space.

The second-floor galleries will be organized by curatorial department, and each will highlight collection strengths. Suites of galleries will be devoted to the history of photography; decorative arts, craft, and design; prints and drawings; European and American 20th-century painting and sculpture; and Latin American Modernism. Incorporating all major movements, and representing the internal histories of these media, the galleries will create novel juxtapositions by cutting across national borders and chronological categories. Decorative arts and works on paper will be interspersed among paintings and sculpture in the European, American, and Latin American galleries.

The third-floor galleries will feature thematic exhibitions. Five inaugural thematic installations will present art from the 1960s onward. These are Collectivity, exploring interdisciplinary works that activate a sense of community; Color into Light, showcasing the dynamic role that color has played in the independent but often parallel investigations of artists in the United States, Latin America, and Europe; LOL!, featuring more than 50 works that use humor as a strategy; Border, Mapping, Witness, with works that consider maps and borders in geographic, social, and political terms; and Line into Space, which examines how artists have explored line in multiple dimensions and media, from works on paper to jewelry, three-dimensional constructions, and furniture.

Selected Highlights of the Installations

The MFAH has an exceptional collection of a dozen mechanical sculptures by Jean Tinguely, dating from 1954 to 1967. Nine of these sculptures will be the centerpiece of an entry-level gallery on the theme of Materials and Motion, which will also include works by like-minded artists such as Niki de Saint Phalle and Jesús Rafael Soto, the latter represented by four constructions from 1956 through 1974.

On the second floor, visitors will find a suite of galleries presenting five collection areas in depth. (Full backgrounders on these departmental installations are available here.)

 The modern and contemporary art departmental galleries will survey European and American Modernism from 1910 to the 1970s, as well as works that existed outside this historical canon. Opening with signature paintings by Henri Matisse, Georgia O’Keeffe, and Pablo Picasso, the installation also features examples by the Czech vanguard and sculptures by Richmond Barthé and William Edmondson. Works by New York artists who ushered in Modernism at mid-century—from Franz Kline and Jackson Pollock to Lee Krasner and Joan Mitchell—are complemented by their European and Latin American contemporaries, including Alberto Giacometti and Roberto Matta. Texas artists Forrest Bess, John Biggers, and Dorothy Hood are included in this segment, as is a recently acquired sculpture by Richard Hunt. Pop Art and Figuration conclude these galleries with works by Robert Rauschenberg and Andy Warhol, as well as Alice Neel’s psychologically charged 1970 group portrait The Family.

 The installation from the MFAH department of Latin American art will include the first presentation in more than a dozen years of the unparalleled Adolpho Leirner Collection of Brazilian Constructive Art, featuring trailblazing works from the 1950s and 1960s by artists such as Lygia Clark, Waldemar Cordeiro, Hélio Oiticica, and Alfredo Volpi. Also on view will be a broad selection of the Museum’s exceptional holdings of paintings, wood constructions, and decorative arts by Joaquín Torres-García and the so-called School of the South; cutout frames and interactive structures by Argentinean, Cuban, and Uruguayan Concrete artists; an installation of approximately 100 monotypes by Mira Schendel considered the largest work of this scale the artist ever produced; and constructions and assemblages by Elsa Gramcko, who is only now being discovered more widely.

 The decorative arts, craft, and design department will show an international range of design and craft dating from 1890 to the present. A focus on British Reform, the Wiener Werkstätte, and the Bauhaus will include Josef Hoffmann’s rare Dining Chair from the Purkersdorf Sanatorium (1904) and one of the earliest known examples of Ludwig Mies van der Rohe’s Model MR 90 Chair (1930). Italian design from 1960 to 1985 and contemporary design, including a selection of Ettore Sottsass’s ceramics (1950–68) and recent work by Ron Arad, Andrea Branzi, and Joris Laarman will also be highlighted. The galleries will include ample representation of the Museum’s distinguished craft collections, including works from the Garth Clark and Mark Del Vecchio Collection of contemporary ceramics; the Helen Williams Drutt Collection of contemporary jewelry; and the Leatrice S. and Melvin B. Eagle Collection of contemporary craft.

 The galleries for the department of photography will present more than 150 works from every period and major movement, 1840 to the present. In addition to this chronological presentation, thematic groupings cutting across borders, formats, and years highlight turning points in photographic history. Themes include French and American daguerreotypes, avant-garde photography in the period between the World Wars, Robert Frank’s epoch-making The Americans, and portraits that convey the variety and ubiquity of photography, from vernacular ID badges to a towering photomural by South African artist Zanele Muholi. A gallery of large-scale contemporary photographs features work by Sarah Charlesworth, Thomas Demand, Stan Douglas, Barbara Probst, Manjari Sharma, Laurie Simmons, Thomas Struth, and Guanyu Xu. Another presents video and time-based media by Fabiana Cruz, Diller and Scofidio, William Kentridge, Christian Marclay, Allison Schulnik, and others.

On the third floor, five exhibitions will address themes in contemporary art since the 1960s. (Full backgrounders on these thematic installations are available here.)

 Highlights of the Collectivity installation—which explores artists’ use of diverse materials and techniques to reflect on ideas of community—include the full set of Carrie Mae Weems’s Kitchen Table Series of photographs (1990); Mark Bradford’s monumental Circa 1992 (2015); vibrant lithographs by Wendy Red Star; Beatriz Gonzalez’s Mutis por el foro (1973), a metal bedframe depicting the death of Simón Bolivar; and Teresa Margolles’s Lote Bravo (2005), an installation of 400 adobe bricks, each made by hand out of the soil where murdered women had been buried in Ciudad Juárez.

 Color into Light highlights artists’ investigations of “color as a situation,” in the words of Carlos Cruz-Diez. This installation features work by artists celebrated for their study of color dynamics, including Cruz-Diez, Josef Albers, and Hans Hofmann, as well as Sam Gilliam, Hélio Oiticica, and Ettore Sottsass; neon pieces by Gyula Kosice and Keith Sonnier; investigations of transparency by Fred Eversley and Shiro Kuramata; and cameraless photographs by Christopher Bucklow and Susan Deges.

 Line into Space focuses on artists’ exploration of line, in which line is freed from representation, producing two- and three-dimensional objects that explore form, space, light, and transparency as autonomous elements. It features more than two dozen works by Gego, including drawings, sculptures, and a watercolor, presented with works including Jean Tinguely’s kinetic sculpture Méta-Malevich (1954) and Brice Marden’s painting Hydra, Summer 1990 (1990).

The Nancy and Rich Kinder Building stands in complementary contrast to the Museum’s existing gallery buildings—the Caroline Wiess Law Building (designed in the 1920s by William Ward Watkin, with later extensions by Ludwig Mies van der Rohe) and the Audrey Jones Beck Building (designed by Rafael Moneo, opened in 2000)—and in dialogue with the adjacent 1986 Lillie and Hugh Roy Cullen Sculpture Garden, designed by Isamu Noguchi. The trapezoidal concrete Kinder Building is clad in vertical glass tubes that emit a soft glow at night in a pattern across its facades. Five rectangular courtyard pools are inset along the perimeter, emphasizing the building’s openness to its surroundings.

The redevelopment of the Sarofim Campus and off-site art-storage facilities has been the largest cultural project in North America, with some 650,000 square feet of new construction. Steven Holl Architects designed the master plan for the redevelopment, along with the Kinder Building and a new home for the Glassell School of Art. Lake|Flato Architects designed the Museum’s new Sarah Campbell Blaffer Foundation Center for Conservation. Both the school and conservation center opened in 2018. Green spaces by Deborah Nevins & Associates, in collaboration with Mario Benito, unify the 14-acre campus and make it a walkable urban oasis in Houston’s increasingly dense Museum District.

Support for the Campus Project

The MFAH initiated its Campaign for the Museum of Fine Arts, Houston in January 2012 with a goal of $450 million, including the operating endowment. The campaign has exceeded expectations, raising more than $470 million to date. Based on the continued interest in Houston to support the Museum and the campaign, the MFAH has continued to fundraise.