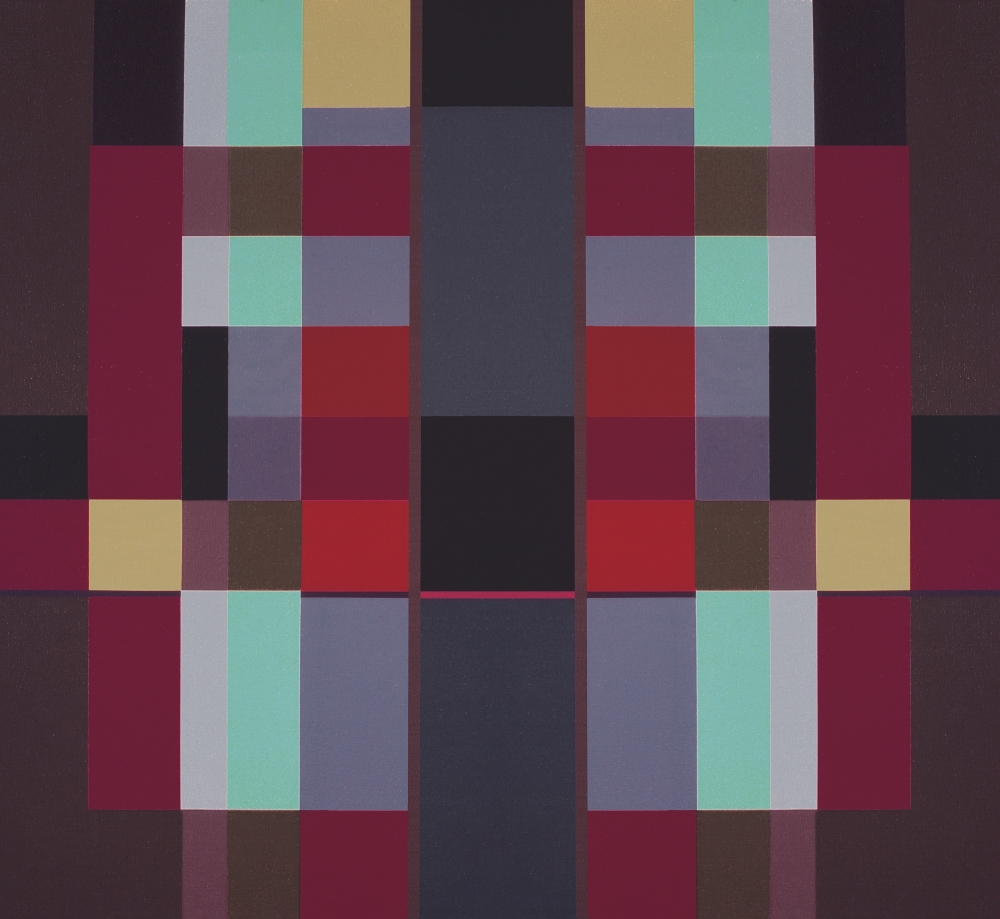 As part of The Duke House Exhibition Series, The Institute of Fine Arts, New York University announces its spring exhibition, Fanny Sanín’s New York: The Critical Decade, 1971-1981, the first comprehensive solo exhibition to explore the artist’s evolving practice of geometric abstraction during her first decade living and working in New York City. Presenting a selection of paintings from 1971 to 1981, the exhibition engages with Sanín’s expansion of the geometric idiom during this period of vital artistic production. The objects in the exhibition will be displayed on the East and West walls of the Loeb Room and on the North wall of the Lecture Hall, juxtaposing the building’s sumptuous and historic architecture with Sanín’s abstract tableaux.

The exhibition, tracing Sanín’s progression towards increasingly complex geometric and coloristic configurations, begins with an early vertical stripe painting, Acrylic No. 2, 1973 (1973), representing the artist’s engagement with linear abstraction at the beginning of the 1970s. Later works such as Acrylic No. 2, 1980 (1980) reveal Sanín’s critical investigation of hard edge abstraction that prompted further interrogations of style, composition, and color. By the decade’s end, Sanín’s practice boasted intricately balanced and harmonious compositions executed with acute sensitivity to color and form that define her mature practice. This critical transition was met with major career achievements: in 1976 Sanín received the International Women’s Year Award at the International Women’s Arts Festival in New York and in 1979 represented her native Colombia at the XV São Paulo Biennial in Brazil.

Sanín’s style of geometric abstraction paradoxically harnesses mathematical precision and an objective sensibility to constellate deeply spiritual resonances. While she demonstrates a shared sensibility with some of her North American contemporaries such as Josef Albers, Ellsworth Kelly, Barnett Newman, Kenneth Noland, and Frank Stella (who similarly explored the possibilities of geometric abstraction) Sanín’s is a unique voice within this tradition. Her symmetrical compositions are the result of rigid exactitude and self-reflective studies that preclude artistic spontaneity; her degree of finish rejects traces of the artist’s hand. Sanín’s meticulous color choices also distinguish her from her contemporaries; Fanny Sanín, Acrylic No. 2, 1980, 1980. Acrylic on canvas, 42 x 46 in. (106.7 x 116.8 cm). Image courtesy of the artist. mixing her own pigments, the artist’s matte finishes and muted palette stand in contrast to the glossy, high contrast canvases typical of this period, revealing Sanín’s remapping of conventional geometric abstraction.

The exhibition will be accompanied by the launch of a major, multi-authored monograph, Fanny Sanin: The Concrete Language of Color and Structure (Lucia|Marquand, 2019) and a public symposium. The publication, made possible by the Fanny Sanín Legacy Project, provides a comprehensive evaluation of the artist’s practice through scholarly essays and includes an illustrated chronology. A symposium to be held on April 7, 2020, will illuminate Sanín’s contributions to geometric abstraction by engaging with speakers whose scholarship is tied closely to one or several themes addressed by the exhibition.

Since 1932 the Institute of Fine Arts has been dedicated to graduate teaching and advanced research in the history of art, archaeology, and conservation. The Duke House Exhibition Series brings contemporary art to the walls of the Institute’s landmarked James B. Duke House. The work is displayed in the beaux-arts interior of the former residence of the Duke family, juxtaposing the historic with the contemporary and inviting viewers to engage with both the past and the future of the Institute. Since 2019, the Institute for Studies on Latin American Art (ISLAA) is proud to support the Duke House Exhibition Series to showcase the work of Latin American artists.