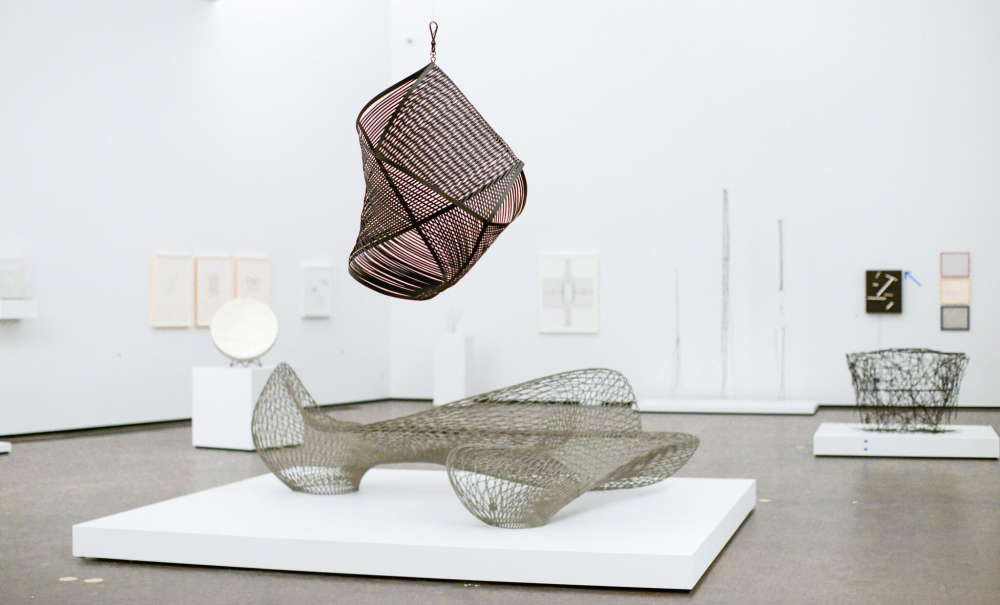 By the Venezuelan artist Gego (Gertrud Goldschmidt), “Vibración en negro (Vibration in Black),” from 1957, in a gallery at the Museum of Fine Arts, Houston. Credit: Brandon Thibodeaux for The New York Times.

Inspiration from South of the Border Moves Center Stage in Houston

A new building at the Museum of Fine Arts, Houston showcases works by Latin American and Latino artists, many of whom are rarely shown in the United States.

From the perspective of the artist Amalia Mesa-Bains, whose parents emigrated to the United States from Mexico, Chicano art — the affirming political expression of Mexican-Americans’ experiences — is “often overlooked,” she said, despite its tenure in America’s West and Southwest for more than a century.

“There haven’t been a lot of people in the museum world that have taken on a commitment to this vastly underrated area of art history, ” she said.

Ms. Mesa-Bains’s own site-specific installations, which pay tribute to Mexican home altars, or ofrendas, did not easily find collectors, and as a result many never survived. But on Nov. 21, when the Museum of Fine Arts, Houston, unveils its new building for modern and contemporary art, visitors will discover her mirrored altar, “Transparent Migrations.” It reflects the experience of working-class immigrants, particularly women invisible to society — one of 250 acquisitions of Latin American and Latino artists, many of whom are rarely shown in this country.

In a city where Hispanics now approach 45 percent of the population, the Museum of Fine Arts, Houston, has spent more than $60 million over the last two decades to build from scratch a collection and research center reflecting the city’s position as a gateway between north and south. “It allows us as Latino or Latinx artists to be seen within the broader understanding of world art,” Ms. Mesa-Bains said, using the gender-neutral alternative to Latino.

Mari Carmen Ramírez, curator of Latin American art at the Museum of Fine Arts, Houston, has focused on collecting its less traveled avenues. “We have bet on artists who were not that well known in the U.S. or who had absolutely no market presence but we knew how important they were for art history,” she said.

The museum’s efforts were led by its curator of Latin American art, Mari Carmen Ramírez, and they are writ large across the inaugural installation of the new Nancy and Rich Kinder Building — the final piece of a multiyear campus expansion designed by the architect Steven Holl.

Latin American and Latino work represent 24 percent of the art on display there, shown in lively exchange with European and American art, photography, prints and drawings, design and craft.

Visitors will encounter a futuristic city by the Argentine Gyula Kosice, his constellation of floating light-boxes in conversation with immersive installations by James Turrell and Yayoi Kusama. Pioneering wire constructions by the Venezuelan artist Gego anchor a thematic display called “Line into Space” that includes a calligraphic painting by Brice Marden and a kinetic sculpture by the midcentury Swiss artist Jean Tinguely.

“There’s a seamless transition from the gallery of European and American modern abstraction to Brazilian Concrete art, from Mondrian to Mira Schendel,” Gary Tinterow, the museum’s director, said, noting that many leading artists in Latin America in the mid-20th century came from Europe or went to school in Paris or at the Bauhaus in Germany. Here, in the only permanent collection galleries in North America devoted to Brazilian, Argentinean, Uruguayan and Venezuelan modernism, “Mari Carmen has created a canon,” he said.

The glowing translucent glass exterior of the Nancy and Rich Kinder Building by Steven Holl Architects is characterized by porosity and opens to seven gardens. It contains the museum’s  modern and contemporary art collection, 25 percent of which is Latin American and Latino.

Since arriving at the museum in 2001, when she established the International Center for the Arts of the Americas, the first research center devoted to Latin American and Latino art, Ms. Ramírez has tracked down significant works, sometimes in closets or under beds, from some 20 countries south of the border and by artists of Latin American descent in the United States.

“We have bet on artists who were not that well known in the U.S. or who had absolutely no market presence but we knew how important they were for art history because we had the research component,” said Ms. Ramírez, who directs the center and its digital archive, which has some 38,000 registered users worldwide. The museum was an early champion of Gego (Gertrud Goldschmidt), Lygia Clark, Hélio Oiticica and Joaquín Torres-García, now widely recognized by collectors and other institutions.

From the standpoint of scholarship and museum presentation, Edward Sullivan, deputy director of the Institute of Fine Arts, said the Museum of Fine Arts, Houston, has “created the premier institution internationally for the exhibition and promotion of interest in Latin American art.”

The field has grown vastly. Its strong players include the Blanton Museum of Art in Austin (where Ms. Ramírez got her start), the Los Angeles County Museum of Art, Tate Modern in London and the Museum of Modern Art in New York, which reopened last year showcasing the gift of Patricia Phelps de Cisneros.

Only a few institutions have collected Latino work, notably El Museo del Barrio (since 1969). In 2017, the Whitney Museum of American Art hired Marcela Guerrero, who trained under Ms. Ramírez, as its first curator to develop a program of Latino art. But no other institution has consistently collected as many Latino works as M.F.A.H., as it is known, numbering about 400 by 71 artists, alongside more than 825 Latin American artworks by 211 artists.

On the eve of the opening of the new building, here are six artists and works selected by Ms. Ramírez that may come as a discovery to visitors.

Born in 1938 in Bogotá, Colombia, educated in London and based in New York since 1971, Fanny Sanín uses hard-edge geometric forms in paintings that synthesize the Colombian abstract movement led by Carlos Rojas and color field canvases by Ellsworth Kelly, Kenneth Noland and Frank Stella. “She’s a very interesting hinge figure who has never really entered the mainstream,” said Ms. Ramírez, who found the large-scale painting “Acrylic No. 5” (1973) hanging on the bedroom wall of Ms. Sanín’s small Manhattan apartment and is now exhibiting her work for the first time. Exploring color, rhythm and movement through vertical bands of varying hues, the painting hangs in the thematic gallery “Color into Light,” which includes works by Kelly, Josef Albers, Hans Hofmann and the Venezuelan Carlos Cruz-Diez.

Virtually unknown outside Venezuela, where she spent her life (1925-94), Elsa Gramcko was largely self-taught and a pioneer of incorporating industrial refuse as an art material. “She had an international career and was shown at the Venice Biennale but history relegated her to just the understanding of a few people,” said Ms. Ramírez, who is showing several of the artist’s constructions on wood with automobile parts. In “The Sun Has Set” (1966), a car headlight takes on the anthropomorphic quality of a giant eye. It is integrated with Constructive sculptures by the Brazilian Lygia Clark and works by members of Joaquin Torres-Garcia’s atelier, a Uruguayan version of the Bauhaus.

Born in 1943 in Santa Clara, Calif., to parents who fled the Mexican revolution, Ms. Mesa-Bains emerged in the 1970s as a feminist leader of the Chicano art movement. Though many of her works are ephemeral, Ms. Ramírez was happy to learn the artist had kept intact “Transparent Migrations” (2001), originally commissioned for an exhibition at the Los Angeles County Museum of Art. The mirrored armoire, containing a small gauze dress and the artist’s lace wedding mantilla, is flanked by blown-glass cactuses as a symbol of immigrants’ resilience. It anchors the “Border” thematic grouping, including a painted lithograph by Ramiro Gomez and photographic installation by David Taylor.

Based in Mexico, where she was born in 1963 and trained as a forensic pathologist, Teresa Margolles tackles difficult subject matter related to violence from drug-trafficking, mostly against women. Her piece “Lote Bravo” (2005) is composed of 400 artisanal bricks made from soil collected from Ciudad Juárez, where the corpses of sexually abused women were found. “It is a cemetery for these women and a memorial to their lives,” said Ms. Ramírez, who has not exhibited the fragile work in more than a decade. The bricks are installed as a wall in the gallery “Collectivity,” with photographs by Carrie Mae Weems and a monumental painting by Mark Bradford.

Now living in Madrid, Carlos Garaicoa was born in Havana in 1967 and is part of a generation of artists that emerged in the 1990s engaged in biting criticism of the Cuban revolution. His installations evoke architecture, memory and political history. A 2007 work, “Ciudad doblada (roja)— “Bent City (Red)” — shown in China but never before in the U.S. — comprises four low tables inlaid with 102 hand-cut and folded cardboard pieces referencing the Chinese and Japanese traditions of origami, and summoning a lexicon of architectural motifs. “He takes China’s history and exponential growth as a starting point and allows viewers to enter this imagined city,” said Ms. Ramírez, who pointed out how the artist drew on the Latin American tradition of geometric abstraction. In a gallery titled “Mapping,” the piece is grouped with a painting by Julie Mehretu and Guillermo Kuitca’s installation of 54 mattresses painted with maps.

Born in Mexico in 1978, Camilo Ontiveros received his M.F.A. in Los Angeles, where he is based, and makes work exploring the instability of the migrant experience. In “Temporary Storage: The Belongings of Juan Manuel Montes” (2009/2017) the artist recalls the first known Dreamer to be deported by the Trump administration, despite protections provided under the Deferred Action for Childhood Arrivals, or DACA. Mr. Ontiveros gained access to possessions Mr. Montes left behind, including his bed, TV, clothing and books. The artist bound them with rope — just as immigrants transport belongings across the border — and secured the vertiginous mass atop metal sawhorses. “The precarious structure embodies the vulnerable status of these migrants,” said Ms. Ramírez, who shows the acquisition in a dialogue with Ms. Mesa-Bains’s “Transparent Migrations.”

A version of this article appears in print on Nov. 15, 2020, Section AR, Page 12 of the New York edition with the headline: South of the Border, Now Center Stage.