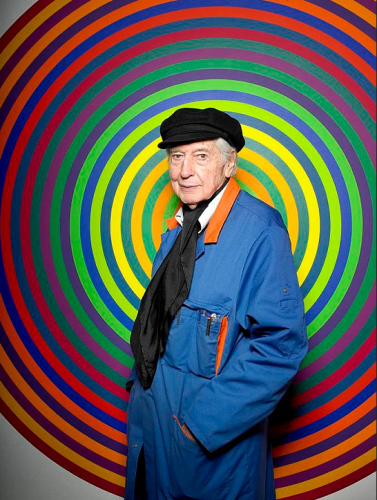 At 91 years old, Julio Le Parc is as dynamic as ever, continuing to create daily in his light-filled atelier in Cachan, a Parisian suburb. A peek into the historical room packed full of 1960’s works, sitting next to the overgrown courtyard, is like stepping inside a noisy arcade. Showing off his sharp, mischievous sense of humor, mechanical games are whirring, vibrating and rotating with plays of light and shadow, sound, movement and visual phenomenon sometimes producing optical illusions. A slatted box concealing a mechanism throws light into horizontal lines on the wall. Nearby, sculptures with reflective blades from his Displacement series fraction and multiply the image to form disconcerting optic effects as a viewer moves around them, while projected light bouncing off suspended mirrored discs creates myriad disco ball reflections. Vibrating Image, Self-Portrait reveals his smiling face jumping in and out of focus on the wall thanks to a purposely shaky projector.

Over the past six decades, the Argentinean artist, considered a pioneer of Op Art and Kinetic Art, has been using color, light, space and movement as esthetic materials. However, eschewing labels that he finds too restrictive, he adheres to an artist-as-researcher approach, which has always been one of experimentation and reinvention rather than concentrating solely on one theme or medium. When he had first arrived in Paris in 1958 on a French government scholarship, he had little more than the shirt on his back and a dream in his heart, as he settled into his tiny hotel room in Montparnasse. Just another unknown South American artist when he left Argentina, the Mendoza native chose Paris to forge a name for himself since it was the center of the art world and his anonymity challenged him to demand more of himself. The French capital also proved to be a haven for Latin American artists escaping oppressive regimes.

Through large-scale installations, sculptures, mobiles, paintings, works on paper and now virtual reality, Le Parc’s aim has always been to disorient viewers and challenge visual perception, with the human experience at the heart of his immersive, participative environments. Continual-Light-Cylinder, which he has been regularly revisiting since 1962, was on display at his first solo exhibition in Asia at Galerie Perrotin in Hong Kong. Visitors were plunged into darkness and invited to lie down on a mattress as they gazed up at the mesmerizing piece attached to the ceiling, with its invisible system of superimposed rotating metal discs, lamps, mirrors and motors diffusing light beams in a circle, giving the impression of entering directly into the artwork.

We sit down with Le Parc to discuss his 60-year-long career and the relationship between artist and viewer.

Paris was the center of contemporary art. I was 30 when I arrived and it was the first time I was able to have all 24 hours of the day to do what I wanted. Together with other artists who arrived later like Francisco Sobrino, we didn’t have much money. We worked with the materials we could find and afford: small boxes, paper, Indian ink and a few tools. To make the early gouaches, I worked all night until six in the morning, all day, all the time. We would eat, come back and work in a small hotel room in Montparnasse. With these small gouaches, we could see ideas emerge, develop more and make do with limited means because my French government scholarship was very limited. So that’s why I continued little by little with economic solutions. By doing this research, I was able to advance and arrive at something else.

Why don’t you like being called a kinetic artist?

I don’t like being called a kinetic artist because sometimes I am grouped with people who don’t have the same behavior or attitude of research, someone whose work is similar to what I have done, but is only a careerist, who has developed a style just to sell or gain recognition, too wrapped up in the system. The problem with categorizations like these are that they encompass everything and anything. I analyzed the situation of the artistic community as well. I thought the best was to start with myself. I have tried to change things by myself, not just theoretically.

When you start a new piece, what is the most important consideration?

It’s to keep a little freedom for myself, to experiment, to do little things in pencil, to do things with light, to do things in the surface or in relief. It is much simpler for the market, for recognition and for museums for an artist to have one style. But my approach is an attitude of research that has continued for a long time rather than one of becoming a monothematic artist, who has always done more or less the same thing for 40 or 50 years.

Participation was the starting point in the analysis with my friends, Francisco Sobrino, François Morellet and others, but there was someone who did not participate at all: the public who came to an exhibition, without making too much noise, only to receive things, but without any power. We began to do tests to find out if it was true that the public was unable to understand the art of its time. Our preoccupation from the beginning was the eye of the person looking, to have visual optical resonances. If we corrected the parameters a little, is the work more or less visual, does it produce more or less an optical reaction in the person looking at it? We started with the experience of the person looking and then from there, participation was solicited little by little with other experiences until active and reflexive participation. We realized that the public was very capable of appreciating what was currently being done or refusing the proposal. They looked and thought things over.

Considering that you have denounced totalitarian regimes in Latin America since the 1940s, would you call yourself a political activist?

No, it’s just simply being a citizen; we can help. At one time, there was a person who informed us in France about the situation of different countries in Latin America that used torture as a system of government in the 1960s – Argentina, Uruguay, Chile, Paraguay, Brazil and others – about the political prisoners, about the people who disappeared and how they disappeared. We could help as citizens, as people. Together with three friends, I made paintings about torture in 1972. There were seven panels, 14 meters long, to denounce this situation. We had an idea; we had to put it into practice.

What do you hope audiences will take away from your works?

If there is a contact that is established between my proposals and viewers, and they leave my exhibition with a certain sense of optimism, that’s enough. If I do paintings about torture to denounce it, that’s very good but it’s not for everyone. If you see paintings on torture, misery or starvation, your optimism diminishes because you say we’ll never get through it. Denunciation is all very well, but from a direct point of view with the viewers, if we instill resignation and can’t provoke a minor revolt or a little optimism, it is negative. On the other hand, optimism may perhaps help people to better confront their problems.

What advice would you give to up-and-coming artists?

I have no advice to give because everyone must find their own way, but if they can reflect on their situation and contemporary artistic creation, try to find its contradictions, and especially if they have something inside of themselves, these young artists, through intensive work, freedom and time, can draw it out of themselves. In recent times, the myth of easy success has developed. A young artist, in the third year, sells a lot and after is overwhelmed by these requests, and then it’s over, he disappears, but in the meantime he has not developed the things he had in mind at the beginning.