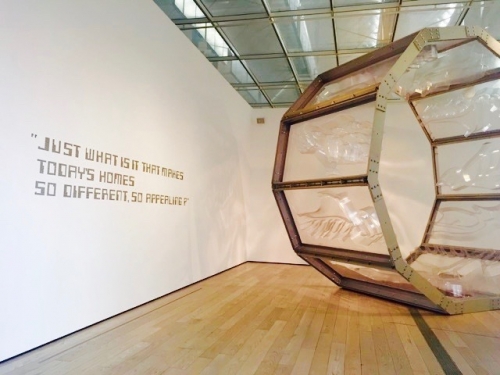 Organized in collaboration with the Museum of Fine Arts, Houston, HOME — So Different, So Appealing features U.S. Latino and Latin American artists from the late 1950s to the present who have used the deceptively simple idea of "home" as a powerful lens through which to view the profound socioeconomic and political transformations in the hemisphere. Spanning seven decades and covering art styles from Pop Art and Conceptualism to “anarchitecture” and “autoconstrucción,” the artists featured in this show explore one of the most basic social concepts by which individuals, families, nations, and regions understand themselves in relation to others. In the process, their work also offers an alternative narrative of postwar and contemporary art.

The show will include works by internationally known figures such as Daniel Joseph Martinez, Gordon Matta-Clark, Raphael Montañez Ortiz, Guillermo Kuitca, and Doris Salcedo, as well as younger emerging artists such as Carmen Argote and Camilo Ontiveros. Including a wide range of media that often incorporate material from actual homes, the exhibition also features several large-scale installations and as well as an outdoor sculpture by Maria Elena Gonzalez.

•    Over 1,200 people attended Home on its opening day, on par with LACMA’s blockbuster exhibit Picasso and Rivera. Over 1,000 people have visited the show each day since the opening.

•    In its first 10 days on view, Home was featured in over 30 publications and on Los Angeles radio programs “Press Play with Madeleine Brand” and “Design and Architecture (DnA)” with Frances Anderton.

•    Art critic Peter Schjeldahl at The New Yorker called the exhibition a "tour de force." Carolina A. Miranda at the Los Angeles Times stated Home “has set the bar high” for the Getty arts initiative Pacific Standard Time: LA/LA. Jori Finkel at The Art Newspaper called it “one of the most ambitious shows.” For additional reviews, visit the CSRC News page.

Home is on view at LACMA through October 15, 2017; open every day except Wednesdays. General admission; no special tickets required. Home will travel to the  Museum of Fine Arts, Houston (MFAH) November 19, 2017 - January 21, 2018.