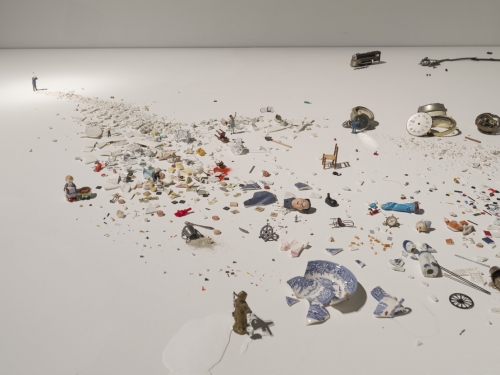 In its scale and complexity, El hombre con el hacha y otras situaciones breves – Venecia 2017 is one of Liliana Porter’s most ambitious projects to date. The piece serves as a form of retrospective, as it contains many of the characters, groupings, or situations that have appeared repeatedly in Porter’s works over the last three decades. The installation takes its name from the tiny figure of a man with an axe, shown hacking away at an elongated pile of fragmented objects. The viewer’s eye follows this array of broken pieces as they shift dramatically in scale, from dust-size particles, to chips of broken china, to damaged figurines, to larger objects that include plates and chairs, and finally to a full-size broken piano.

The viewer will notice several old clocks of varying sizes. These symbols of linear time are shown completely broken apart, their white faces, circular metal casings, and interiors spilling outward in disarray. Central to Porter’s practice is an investigation of time. She is specifically interested in how, as time passes, the line between reality and imagination becomes increasingly tenuous, as the current moment mixes with memories from the past that are often exaggerated in scale, fragmented, or broken. Porter is interested in how time becomes recorded not only in memories, but also in objects, images, and literature.

Historical figures and symbols appear throughout the installation. A plastic toy replica of the car in which President John F. Kennedy was assassinated is exhibited. Nearby an old hammer is placed casually on a sickle, tools and symbols of the industrial worker and the peasant farmer used in international Communism and on the flag of the Soviet Union. Elsewhere appears a broken porcelain head of the Chinese Communist leader Mao. These and other representations of the past emerge haphazardly, their ideologies and historical positions coexisting in the same space.

A tiny figure carrying a suitcase appears alone, isolated in one section. He stands between two lines that twist behind him, forming a path he has apparently been following. This is “the traveler,” another important player who has appeared consistently in many of Porter’s prints, paintings, photographs, films, and installations since the 1980s. A classic trope for the beginning of a story, the traveler is also often an immigrant, a refugee, someone displaced. In a world where we are increasingly from one place and living in another, and in a city like Miami that is populated with many immigrants and travelers, Porter’s philosophical reflections resonate strongly, while they simultaneously and persistently confound.