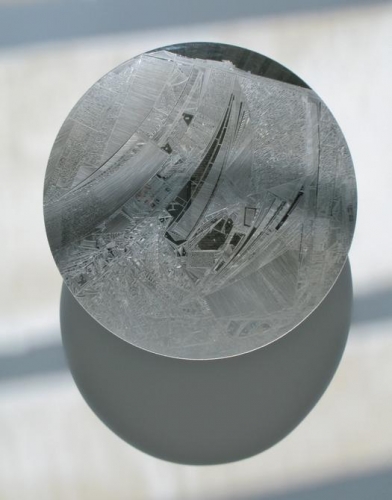 The gallery's Armory exhibition pairs recent works that explore ideas of past and future in Latin America: from the Pre-Colombian world of Machu Picchu and terraced landscapes of the Andes, to futuristic cityscapes incised into aluminum foil and geometric picture planes constructed from used matchbooks, the works offer perceptive explorations of space and time.

The four artists also share an approach to process and materials: they all use unusual or found materials that add a significant conceptual underpinning to their work. For example, Miguel Angel Rojas’s Machu Picchu (2013) is a drawing made from coca leaves and dollar bills; the work offers a poignant critique of the commerce of drugs and money in the land of the Inca. Miguel Angel Ríos uses the Mexican tradition of papel picado to create a large-scale drawing of cannons, pistols, and machine guns for Untitled #4 (2012), referencing the Mexican drug war and its attendant violence. For Maggi and de la Mora, unexpected materials underpin their methodical compositions. Maggi's PreColombian & PostClintonian (TX) (2010), is an intricate drawing, incised on a roll of Reynolds aluminum foil. De la Mora's series Cerillos Cancelados uses the "cancelled" sides of match boxes to construct geometric canvases, in dialogue with the traditions of Minimalism and geometric abstraction.