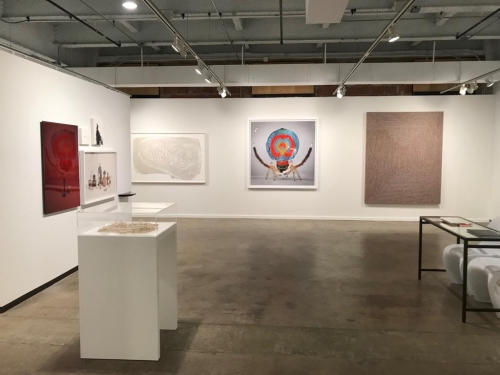 This is your guide to the Dallas Art Fair’s best national and international booths, plus side action featuring junk shopping and a multicontinental performance artist making waves just footsteps from the Joule.

Dallas Art Fair — the first art fair in Texas — began in a modest but promising way, with about 30 dealers. The fair’s co-founders — downtown developer John Sughrue and indie curator/artist Chris Byrne — wanted to attract galleries that were interested in developing connections with Dallas collectors and fostering new ones.

They sought more dialogue than mere commerce, with a commitment to keeping the content at a high level, while showcasing the wonders of Dallas, especially the Downtown Arts District, as a cultural destination.

Flash forward 11 years: The Dallas Art Fair enters it second decade this spring. Significant growth has taken place, as national and international art-world illuminati have embraced the fair. One hears German, French, Spanish, and Italian wafting across the lawn of Fashion Industry Gallery.

But what distinguishes this fair from others is the mix of the international with the Texan. Dallas Art Fair has been welcomed to town by the collector community and museum powers that be — especially Dallas Contemporary, Dallas Museum of Art, and Nasher Sculpture Center, which all benefit from the opening night Preview Gala.

"THE FAIR IS PRODUCED FROM INSIDE DALLAS BY THOSE INVESTED IN THE CITY’S BUSINESS AND ITS CULTURAL LANDSCAPE, AN IMPORTANT DISTINCTION UNHEARD OF IN MOST FAIRS ACROSS AMERICA."

This fair has made a trip to metropolitan Texas in April as exciting and buzz worthy as one to Miami Beach for Art Basel in December.

The curatorial vision comes from Kelly Cornell, who has morphed from a sharp intern recruited from SMU in 2011 to fair director. Joining Cornell and heading up dealer relations is artist Brandon Kennedy.

London-based Calypso’s photographic setups in odd environments address femininity  and desire, serving up a millennial take on ideas first enacted by Cindy Sherman that are so in keeping with our times.

As in years past, more than 10 percent of the exhibitors are local. Dallas dealers range from stalwarts of the scene such as Valley House Gallery and Conduit Gallery to the new energy represented by the recently minted programming of Sean Horton (Presents) and Gallery 12.26. Liliana Bloch Gallery — where the Dallas Art Fair Foundation went shopping last year for the DMA — debuts a new series of Leigh Merrill photos in black-and-white, while Sputnik Modern interjects a welcome dose of design.

Previewing the lineup, we’d single out those arriving from across the pond, beginning with the UK contingent. Don’t miss London power trio Sadie Coles HQ, where YBA Sarah Lucas is a best bet; Lisson Gallery, showing a football-related sculpture by Hugh Hayden that gives visceral pause; and Blain|Southern, traveling to Dallas for the first-time.

Also from London, Hales Gallery shows the luminous, geopolitically charged canvases of Frank Bowling, whose work is powerful enough to be the sole artwork in a room, as witnessed in his current installation for the entry of The Menil Collection in Houston.

From the Arab world, Carbon 12’s booth will feature an assemblage culled from weaponry and war by Sara Rahbar, last seen here in a solo at the Dallas Contemporary timed to the 2018 fair.

Always a prime player, Perrotin’s booth includes work by Paola Pivi, the Italian installation artist who captivated audiences with her bears at the Dallas Contemporary in 2016.

At Mexico City gallerist Enrique Guerrero, check out layered collages from the “Panamerican Suite” by Pablo Helguara. At James Cohan, Trenton Doyle Hancock’s saga of the Mound continues in all its glory, nicely timed to the artist’s concurrent shows at The Menil Collection and MASS MoCA.

The 2019 ADAA The Art Show-exhibited Inman Gallery curates a triple play that explores the duality between abstraction and the body and/or land: Sigrid Sandström, Karin Davie, and late Texas modernist Dorothy Antoinette “Toni” LaSelle, who is well-known in Dallas and Fort Worth as a teacher at Texas State College for Women (now TWU) for more than 40 years.

The Guerrilla Girls would be proud: Besides Inman’s booth devoted to female artists, McClain Gallery focuses on one of Texas’ greatest painters: Dorothy Hood, the late Mexico City and Houston master of color-field abstraction tinged with Surrealism’s language of frottage.

Nancy Littlejohn Fine Art, which has a big buzz going this spring with a new art space and ambitious programming, presents a slice of its stable that balances figuration and abstraction, from the brooding portraits of Cuban-born Enrique Martínez Celaya, a USC professor collected by the Whitney and The Met, to the sublime light-and-space canvases of Wimberley-based McKay Otto.

What’s a fair without accompanying popups to interject a dose of the unexpected and amp up affordable options.

Former Museum of Fine Arts, Houston, Core Fellow Bill Davenport travels from Houston to reprise Bill’s Junk Road Show at Talley Dunn Gallery. A cross between a junk store, a retro tourist trap filled with collectible oddities (giant yarn balls, the world’s largest trove of macramé owls), and Davenport’s own museum-exhibited take on Pop art, this is a must for every high-low collector.

And, Jordan Roth is at it again; his bookend to Dallas Art Fair 2018 was a place of exuberant art shopping and an impromptu after-party following the Eye Ball. Reprising his successful locale from last spring, Ro2 Art returns to 1508 Commerce at the base of the historic Dallas Power & Light Building.

Jordan told PaperCity that he’ll present a solo for Texas/Nigeria-based Akirash, fresh from a performative exhibition at Houston’s Lawndale Art Center, as well as a sampler of gallery talent.