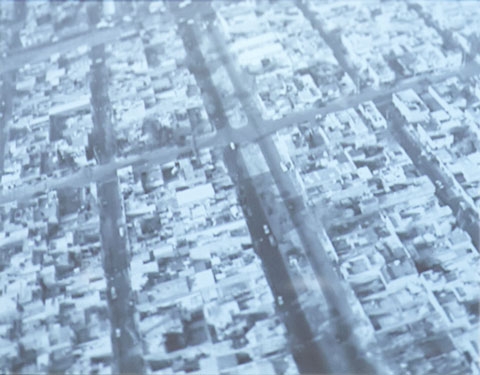 Experience the Modern's film and video collection from home with our new program Modern TV, launching May 16. Every other Saturday at 7 pm, free screenings of videos by leading contemporary artists will be linked or livestreamed here. Though our galleries remain temporarily closed, we invite you to stay connected with us through our online resources and special events.

Robert Smithson is best recognized for earthworks such as Spiral Jetty, 1970, a swirling 1,500-foot-long landmass comprised of rock, dirt, and salt that juts out from the shore into the Great Salt Lake. Known for disappearing and reappearing as the water level of the lake fluctuates, the work is a testament to the artist’s interest in environmental shifts and unstable situations—ideas that continue to have great urgency today. The film Spiral Jetty, a “portrait” of the monumental earthwork, is an artistic endeavor of its own identity. Featuring voiceovers by Smithson and juxtaposing the industrial violence of Spiral Jetty’s construction with the peaceful beauty of its surroundings, the film provides an ambivalent, disorienting perspective of the artist’s iconic work.

Melanie Smith’s Spiral City, 2002, is a response to Smithson’s Spiral Jetty earthwork and related film. Her video transforms a brief aerial journey above the streets of Mexico City into a meditation on history and modernity, time and space, order and chaos. Founded on an island in Lake Texcoco nearly 700 years ago, Mexico City has grown into one of the world’s most crowded and polluted urban areas. Filmed from a helicopter as it climbs in widening spirals, Spiral City confronts the city’s unending grid of streets and buildings. As Spiral Jetty testifies to the entropic processes of natural materials, Spiral City suggests that the urban environment is subject to crystalline-like patterns of growth and erosion.