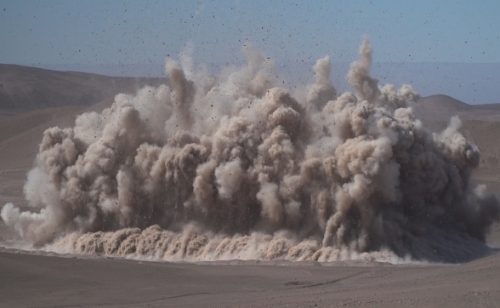 The UK Mexican Arts Society is pleased to inaugurate its programme of exhibitions with a video installation by Melanie Smith.

Maria Elena is a small mining town in the Atacama desert, founded in the 1920’s and developed by the Guggenheim’s to produce saltpetre, used for both fertilizers and explosives. The film explores an ongoing interest in the application and obsolescence of industrial modernity. It also traces the impact of the British in the region, who were heavily involved in the extraction processes of nitrates incorporating it into a satellite of an economic global system. The narrative threads a tale of contradicting montage, whereby crystals become stars, a horse’s ear a mountain and enormous beds of nitrate appear as informal abstract paintings, exposing the geological terror of the past and future.

Melanie Smith (1965, England) moved to Mexico in 1989, where she established her career in the Mexican art scene of the 1990s after training as a painter at the University of Reading.
In the early 1990's, Smith turned her flat in the historic part of Mexico City into Mel’s Café, a weekend ‘pop-up kitchen’ where artists including Francis Alÿs and Gabriel Orozco would play cards and exhibit work. Smith has since become a cornerstone of the artistic community in Mexico and represented the country at the 2011 Venice Biennale.

The UK Mexican Society is supported by the Mexican Embassy in the UK.