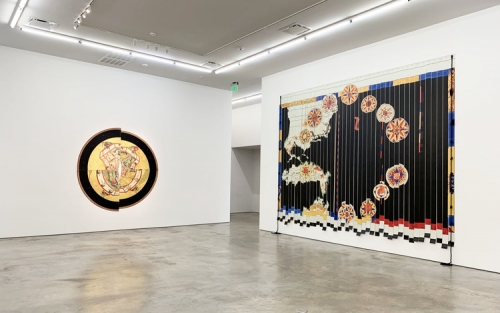 Photos courtesy of The Houston Review

“A world without borders will never happen because man is too greedy when it comes to possessions. He just doesn’t like to share because then he may end up with nothing.

I know one thing…

As we are shaken with the news of borders, walls, and other political turmoil, it is most fitting that Sicardi gallery has chosen to bring an artist to Houston who for over 40 years has grappled with the question of borders and nations, stemming from his own personal experience escaping from his home of Argentina in the 1970’s due to military dictatorship. The exhibition, Torn to Shreds, takes the view points of maps, borders, and cartography and expands upon them in a momentous viewer engulfing exhibition that engages both sight and mind, all taken from a body of work that was created within the 1990s.

Reverberations from history in search of wealth, power, conquest, and fame can be felt within the exhibition as Rios contorts these ideals through the use of repurposing maps for not only a visual purpose but a heavy yet thoughtful concept as well. Most individuals that have come in contact with similar visuals have only experienced these types of maps within text books and history lessons, most likely glazed over in the frills of youth in geography or history class. By taking these historical documents, Old World in nature, and transforming them into a juxtaposition of cuts, folds, and bends allows for Rios to politically comment directly yet sublimely within the same piece.

In this particular exhibition, Rios presents work from the early 90’s that thoughtfully examines the 500th anniversary of Columbus arriving in the Caribbean Islands. The way that the artist cuts, contorts, and re-creates the maps is offered as criticism of the “discovery of the Americas” that has been a cornerstone in American history for years. Composition wise, some pieces offer more complexity in layout than others but the overall message remains the same all banking on their gargantuan proportions which only strengthen the grandness of the height within Sicardi’s space

Take for example one of the strongest pieces in the exhibition Los estrellas nos guian which is a visual vortex of folds and layers of a map swirled into a new landscape that distorts the symbols and borders in a surrealist manner that suggests the temporary submersion necessary to ponder and hopefully question the social constructs of states and nations.

The most striking form of the piece are the white outer edges which seem to grow from the stark gallery walls mounting with tension as the colors and forms of the map begin to appear in the center. This piece stands true noting that Rio’s work has always had these political undertones (or driving points some might say) most noted for the power within these notions of man made constructs and violent wars to defend them especially in regards to colonialism in Latin America which holds his birth place of Argentina.

These same strands of poetic repetition are also connected to the other pieces within the exhibition in regards to the meditative folding of paper in Los Cuatros Vientos where the white reverses with the black, focused on the medieval style writing on the borders shifting into the faces and symbols cornered by opulent gold. Unlike the other works, this one doesn’t cradle a map rather the map is manipulated beyond recognition only leaving shattered sentiments of it’s original purpose. The problem ancient cartographers faced of how to properly represent a portion of a sphere on a flat surface is intuitively mimicked within Rios’ work especially within these pleated pieces.

This same dilemma of these keepers of history play out within the distortion of area and distance along with the rearranging of visual unity within the maps in such pieces as Mangallian entitled after the Capitan of the fleet that first traveled around the earth. The map, shuffled up and down within fragments, majestically stands from floor to ceiling, with the Americas intact on the left side of the piece. The most striking aspect of this particular work is the way Rios blacked out the entire sea, strongly erasing the nautical routes of the ships manned by Magellan and other individuals. The starkness of the pigment as vast as the sea it covers is one of the most memorable statements made by the artist which is only juxtaposed by the slight shuffle of pieces.

Of course the obvious take away from this exhibition is the fact that the issues of borders along with the violence and political turmoil they have caused, is something that plagues every generation. Although these works were made in the 90s, the poignancy of the problem matched with the eloquent yet raw emotions within the pieces are all refrains that sing out today. “…I make visible the violent movement in which we live, where we feel that life has no value. It is competition, power, violence, and chaos. The viewer may choose to identify with the powerful or with the vulnerable.”

As for the concept of being torn, certainly the ripping of family units, morals, and societal responsibility is something we face just south of us in the most alarming way. Where one would like to see the latest of Rios’ artistic creations out of the turmoil we face today, certainly this show still shows the relevance of the artist’s focus and his ability to create work that sends waves regardless of time period. With this, it simply re-enforces the fact that art is a commentary on society and as artists they are often the visual record keepers of events. Where borders, walls, and the struggles over nations may dissipate, the power of art will stand the test of time.