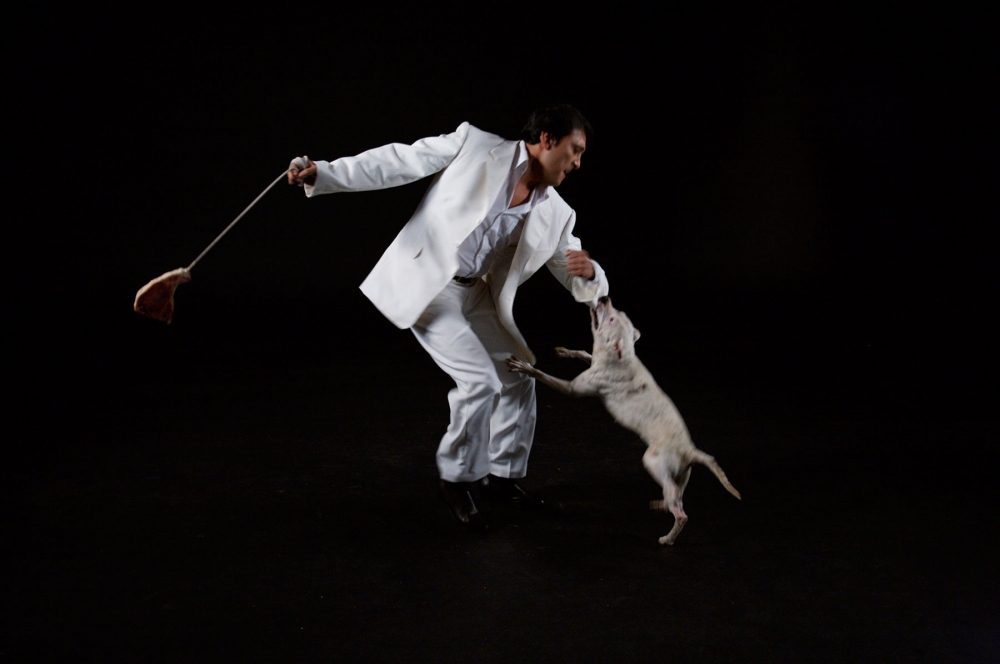 Before becoming one of Latin America’s leading conceptual artists, Miguel Angel Ríos (b. 1943) grew up in Argentina’s Calchaqui Valley of Catamarca, far from the urban, Eurocentric atmosphere of Bueno Aires. In the vast landscape of the Andean province, he became an expert hunter by the age of ten. However, he eventually realized he wanted to be an artist. After studying at La Academia Nacional de Bellas Artes in Buenos Aires and teaching as an art professor, Ríos decided he had to move to New York City to pursue his dreams. He also felt he had to move because of the military dictatorship that was taking over his country in the mid-1970s. He now divides his time between New York City and Mexico City, so he can remain in the center of the art world while still having a connection to Latin American culture.

Ríos became known in the 1990s for map-based constructions that explore colonialism and globalization. He created the series by redrawing countries and shifting the customary focal points to present more scientifically accurate land distributions. Ríos then carefully folded and pleated the maps, giving the long-established craft of map-making new life and texture as the updated imagery offered new worldviews that were both visually and intellectually enriching.

Ríos then began experimenting with sculptural installations using sound and video in the early 2000s. The videos employ wide-open landscapes and Latin American sports, games, and dance to scrutinize human attraction to both spirituality and violence. In many of these works, the desert is a central character for Ríos. As Laura A. L. Wellen notes, this unassuming arid land “has served as a symbol of the liminal space between the Americas, it acts as a site of disjuncture, and as a protagonist in the economies of wars, drugs, and borders.”

Ni me busques… No me encuentras (Don’t look for me…You won’t find me) (2002) exemplifies this association. In the desert region of San Luis Potosi, Mexico, Ríos takes a hallucinogenic voyage as he searches for the sacred, indigenous cactus known as peyote in the vast, desert landscape. Using erratic camera movement and digital effects, Ni me busques shows the landscape as it stretches and shrinks, turns and collapses. A marching band appears and parades through bushes, as does the sound of a rushing, yet invisible, train. Ríos then enters an adobe house and hears “the sound of [his] mother baking bread” before the walls separate and the house divides itself.

Rios also has employed trompos, the spinning tops used in a popular Mexican street game, to create a trio of videos that portray various human experiences. A Morir (‘Til Death) (2003) shows a struggle for power and the dynamics of competition, aggression, and territorialism with spinning black tops. The objects whip around each other, bump, and collide to ultimately kill themselves off. On the Edge (2005) features a larger number of spinning tops involved in choreography that is more complex and divided by color. Alluding to the struggle for power in society, Ríos explains that the “white spinning tops are dominant and take the central stage preventing the access of ‘others’ that are subordinate to them by patrolling their territory by spinning back and forth. Meanwhile, the subordinate black spinning tops come from a lower level and attempt to access the higher ground controlled by the white ones.”

The game in On the Edge serves as a metaphor of the battle for social supremacy, while in LOVE (2006) it represents just that. As Maria Callas sings an aria about a suffering heart from the 1892 opera La Wally, Ríos filmed two black and white tops as they spin forward and backward. The trompos touch together or nearly miss in a whirling, sometimes violent, but beautiful, courtship dance until they eventual topple.

Mecha (Fuse) (2010) was inspired by the street game tejos. Popular in the barrios of Bogota, Colombia, tejos involves the tossing of heavy metal disks (tejos) at wooden targets coated with clay. Players also try to hit small triangular envelopes (mechas) filled with gunpowder that explode when struck by a tejo. Referred to as “bocce ball with bombs,” when filmed by Ríos the game becomes an allegory for war lust and the violence that has plagued Colombia as well as other conflict zones around the world. Ríos’ handheld cameras show the running legs and flying arms of the players amidst a barrage of smoke and explosions, thereby conveying the point of view of war journalists in combat.

A sense of danger also permeates Piedras Blancas (2014). Filmed in the Mexican state of Morelos, the video follows the avalanche-like run of more than 3,000 white cement balls unloosed on the side of a mountain. They loudly roll and bounce across the landscape in long lines and great masses with increasing velocity and sometimes explode as they hit obstacles. The action of Piedras recalls the contentious political and economic issues surrounding immigration as well as the drug trade. Ríos has acknowledged “the inevitable metaphor: the demand and supply of drugs coming from South to North across the U.S.-Mexico border” as well as “the gravity of the incline in a mountain [that] makes the stones roll...[and represents] the economic power of the demand for the substance.”

Rather than an allusion, Crudo (2008) is an explicit demonstration of brutality (in the midst of impressive footwork) that offers a stirring take on struggles of power between master and masses. It begins in a blackened space with the percussive sound of tapping feet that leads to the reveal of a white-suited man dancing the Argentinean malambo sureño, a dance historically performed by men as a way of displaying their macho gaucho skills. A few frames later, as he dances, the man swings boleadores, a type of lasso used to capture cattle or game by tying their legs together. However, chunks of raw meat are tied to the ends of the rope. He deftly slings the flesh around the space just as he encounters a group of angry dogs. The dancer tests and taunts the animals, which bark and at times leap on and bite him. Nonetheless, he continues to perform and never loses his composure. The video is an allegory of power dynamics that plays with a range of dichotomies, such as black and white, human and beast, order and disorder, grace and brutality, control and unpredictability, and so on. Yet, Ríos never attempts to resolve the tension of Crudo. He leaves the viewer to question and contemplate its logic, the effect lingering long after the dancer taps his way off screen. —Kanitra Fletcher