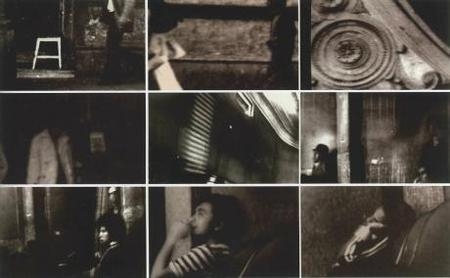 Landmarks Video at the College of Fine Arts, The University of Texas at Austin presents a month-long screening of Corte en el Ojo (2003), a film by Miguel Angel Rojas.

Born in Bogota in 1946, Miguel Ángel Rojas’s artistic practice has established him as an influential force in and beyond Colombia. Through a range of approaches, including intrigue, displacement, and juxtaposition, Rojas challenges viewers to take notice of largely unseen social interactions and political connections.

The intimacy of individuals is captured in Corte en el Ojo (2003). Named after a physical injury Rojas acquired during the creation of the piece, the first half of the video features Rojas’s secretive photographs of homosexual encounters, specifically his final set of images taken in Bogota’s Faenza Theater, entitled Faenza (1979). As a video sequence accompanied by a touching soundtrack, the once-ghostly pictures come alive.

Corte en el ojo screens from 1 October through 31 October on a media station in the ART building located on the corner of East 23rd Street and San Jacinto Boulevard. For more information, please visit: http://landmarks.utexas.edu/projects/video/rojas