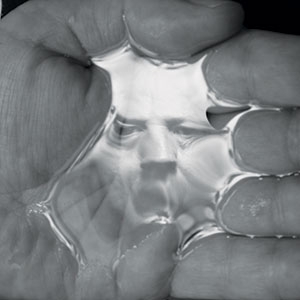 The unofficial centerpiece of "The Matter of Photography in the Americas" is Untitled (Glass on Body Imprints). Ana Mendieta's series of arresting self-portraits hangs on a transitional gallery wall in this Cantor Arts Center exhibit. Employing an aesthetically minimalist approach, the photographs are easy to pass by. But the emotional content is maximal, and strange enough to induce a pause.

In a colorless room, the images are cropped closely on the artist's naked body. She holds a small pane of glass in her hands, pressing it tightly against parts of herself. She compresses her buttocks in one, and, in another, she flattens her right breast while at the same time halving her left.

By placing that cold, hard edge of glass between her body and the camera lens, Mendieta, a Cuban American artist who died in 1985, deliberately erases any sense of eroticism from her frame. If you're unfamiliar with her work, you could mistakenly project a playfulness onto the series, the way that Nina Katchadourian does when she recreates 17th century Flemish paintings as self-portraits. But in a telephone interview with co-curator Natalia Brizuela, the associate professor at UC Berkeley addresses the idea of Mendieta's artistic influence.

"The question of history is very much in there," Brizuela explains. "You could say that someone like Nina Katchadourian belongs to a generation where people like Ana Mendieta were fundamental for them."

Brizuela also expanded on the overall message that she and her co-curator, Jodi Roberts, intend for museumgoers who visit "The Matter of Photography."

The exhibit includes works from 12 different Latin countries and is divided into eight categories (nine with "Performance" that will be part of a scholarly panel taking place at Cantor on April 12). Roberts, who is the Halperin curator of modern and contemporary art at the Cantor Arts Center, said the initial list of images, ideas and artists was huge. She described their approach to curation as "giving primacy to artists who were thinking very deeply about, not only the material of photography in its literal physical sense, but how it functions in the world. And how it helps to shape our understanding of history, of geography, of people and of current events." The categories—matter, data, erasure, copies, imprints, discipline, news, ethnography—emerged organically from there.

Within these categories, Brizuela and Roberts have gathered together artists who are relentlessly inventive with their cameras and the paraphernalia that comes with it. The artists on display also subvert the viewer's expectation of what a photography exhibit normally shows. Oscar Muñoz, from Colombia, is represented by several works but "Línea del destino (Destination Line)" and "Narciso" are particularly memorable. They're two separate but complementary videos that play next to each other. Both are ephemeral. A hand holds a palm full of water in "Línea del destino." In the center of the hand, filmed in black and white, the artist's face shimmers in the light. And then, as the water escapes through his fingers, his image fades away.

"Narciso" too uses water to make its point. This time the camera holds steady over an anonymous white sink. The faucet pours water down onto an ink or charcoal drawing and its shadow. It's a vision of a young man's identity in formation, a Narcissus who will never age, staring back up at the real, aging man from the bottom of a porcelain basin. Muñoz himself will be at the Cantor on March 22, Roberts confirmed. She suggests that the artist will have something to say not only about his process but the age we're living in where "we're totally inundated by photographic imagery."

The Matter of Photography in the Americas
Thru April 30, Free
Cantor Arts Center, Stanford
museum.stanford.edu