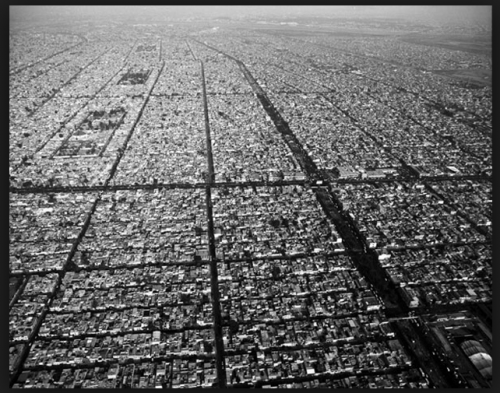 The Galleries at Moore are pleased to announce Strange Currencies: Art & Action in Mexico City, 1990-2000, a major exhibition that explores what artists were making – and making happen – in the megalopolis during this fraught and formative decade.

Strange Currencies examines the emergence and development of experimental artistic practices in Mexico City in the 1990s, a decade defined by a catastrophic economic crisis, enormous social upheaval and poverty, widespread political corruption, a chronic rise in violence, and continuous instability due to the destabilizing effects of rapid globalization.

In this singular, decisive moment in the city’s cultural history, artists were uniquely able to experiment with new forms and take artistic risks that resulted in the creation of works and development of new practices that radically altered the dynamics of the local art scene and profoundly transformed the city’s artistic landscape.  In a time informed by hopelessness and pessimism, artists rejected traditional art forms in favor of unorthodox, ephemeral, action-based and socially-engaged practices that were often cynical, subversive and irreverent, linked art and everyday life, and critically reflected the momentous events that were unfolding around them.

The exhibition brings together a group of twenty-eight artists who were living and working in Mexico City in the 1990s and whose divergent practices and perspectives reflect the multiplicity of themes, approaches and perspectives that developed and emerged during this pivotal decade, and will include approximately eighty artworks in a broad range of media, including sculpture, photography, video, painting, installation, performance and sound.  All of the works were carefully chosen for their ability to function as points of departure for a deeper investigation and understanding of key issues and ideas that artists were exploring at the time, including gender, class, the flow of economic and symbolic capital, social inequity and struggle, violence, urbanism, youth culture and the realities of everyday life in a city permanently in crisis.

Strange Currencies will present an alternative, lesser-known history of 1990s Mexico City that has not been presented in previous exhibitions and will recapture the funkiness and dynamic spirit that defined the decade’s diffuse and vibrant cultural scene.  In order to place the artworks on view into context, the exhibition will also include archival materials and documents, including photographs, video footage and printed media, a range of underground and artist-produced publications and a listening station featuring an artist-curated mix of music from the 1990s.  It will bring together iconic and lesser-known works – many never exhibited outside of Mexico – that are both artifacts from a pivotal moment in the Mexico City art world and key markers in the cultural history of the city.

The exhibition is curated by Kaytie Johnson, the Rochelle F. Levy Director and Chief Curator of The Galleries at Moore, and will be accompanied by a fully illustrated catalogue.  It will be complemented by a series of public programs and events; a symposium; and a curated film series at International House Philadelphia that excavates the media landscape that significantly shaped urban cinema culture in 1990s Mexico.