We are pleased to present Perception: Works from 1964 - 1992 featuring work by Jesús-Rafael Soto (1923 - 2005, Venezuela/France), on view through December 19, 2020. Working in the mid-20th century between Venezuela and France, Soto led the kinetic art movement alongside European counterparts Yaacov Agam, Jean Tinguely, and Victor Vasarely. He combined insight from the fields of physics, mathematics, music, and color theory in a masterful way to harness the intrinsic properties of color and to achieve highly dynamic effects. Soto developed a kinetic vocabulary that produced optical vibrations, modifying the viewer's perception of space through a structural superimposition of lines, suspended elements, and geometric figures, in paintings and three-dimensional constructions. Dating from the 1960s to the 1990s, the works in this exhibition exemplify Soto's iconic Vibraciones and Ambivalencias series.

Soto conceived his Vibraciones series in the late 1950s by suspending rods and wires in front of a black-and-white striped background to explore the vibrations created by the superimposed lines and their visual dematerialization.

He expanded on this concept through his Ambivalencias series, in which he juxtaposed a black-and-white striped background with colored squares that project forward from the backdrop. Standing in front of the piece, and moving around it in space, the viewer experiences the optical illusions of movement and vibration as the eye struggles to visually hold the colored squares in space.

Of his Ambivalencia series, Soto says it is “the solution…to a number of issues that were more or less implicit in [the work of] the great Western artists…who tried to use color independently of form and extra-pictorial content… We witness [color’s] capacity to generate the illusion of a space that is optically variable, as some dots seem to advance while others seem to recede.”

The gallery is open by appointment only. We are closely following local government guidelines and taking every precaution to ensure the well-being of our visitors and team. To schedule a visit, email info@sicardi.com or call William Isbell at 832.264.3466. 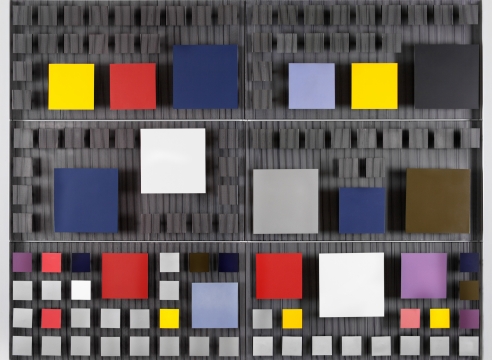