by Giovanna Bassi and Fabiola López-Durán

“I am a breather” (“je suis un réspirateur”). This intriguing statement by Marcel Duchamp inspired the title of John Sparagana’s new exhibition at the Sicardi Gallery.[1] Interested in both the mechanical character of breathing—its gesture of inhaling and exhaling—as well as its creative function—from inspiration to the very operations that sustain life—Duchamp sought to ascribe aesthetic significance to the minimal.[2] In his exhibition “Breather,” Sparagana echoes Duchamp’s artistic strategy of reducing everything to its essence in his own subtractive yet constructive process of “emptying things out.”[3] In this new series of paintings, which derive from his previous work on American comics, Sparagana paradoxically turns to modernist abstraction from mass media. From comics to geometry, from blurring and partially erasing figures and texts to systematizing forms, Sparagana progressively moves to eliminate all of them completely, privileging the structure that organizes them within the rhythmic organization of empty monochromatic spaces. The result—which only in appearance completes the process of a “gradual decline into indecipherability” that art historian Benjamin Paul identifies in Sparagana’s previous work—inevitably distills modernist geometric abstraction.[4] As this essay argues, by retaining the comics’ structure and palette of colors, the artist, who never intended to create pure abstraction, actually exploits the failure of modernism to repress language and embody pure visuality.

A product of both systematic and creative processes, Sparagana’s “Breather” further illuminates the dialectical tensions that pervade his entire oeuvre: destruction versus creation, mechanical versus handicraft, mathematical versus incalculable. Sparagana explains that he introduces a system to capture “a particular visual and material condition, but also to set up a tension between an objective process and subjective decisions.”[5] In this series of paintings, he uses the structure and colors of American comics as “a kind of DNA” that creates a generative system, circling back to its origins.[6] Just like the slicing and mixing of “fatigued” magazine pages into grid organizations is the generative system of Sparagana’s “Crowds and Powder” series (2013), his introduction of subtly different tonalities and textures within grid module color fields in “Breather” counteracts the objective process, bringing the paintings to what he calls the “third condition”—a kind of neutral state through which his paintings become “vehicles to a more complex, subtle, and ambiguous narrative.”[7] By so doing, Sparagana not only discredits modernism’s pretense of speechlessness but also annuls mass media’s ability to transmit grand or simplistic narratives.

Thus, the paintings in “Breather,” which visibly embody modernist abstraction in its rejection of figuration and its formal structuring in a Cartesian grid, recall the failure of the modernist project—shattering its illusion of visual purity and the elimination of language and subject matter.  Ironically, the grid, famously declared the “emblem of modernity” by Rosalind Krauss, announcing “modern art's will to silence, its hostility to literature, to narrative, to discourse,” is like hieroglyphs or symbols—those kind of images that are the most contaminated with language.[8] According to Krauss, the grid isolates the visual arts into “a realm of exclusive visuality,” protecting modernism against “the intrusion of speech.”[9] However, the grid and the color blocks in Sparagana’s abstract paintings keep conjuring up the comics: one feels like their narratives are still present, lurking in the background, albeit completely undermined. So, much like modernism, as Sparagana argues, “the comics transmit a kind of American mythology—a highly simplified and destructively self-serving morality,” imposed by the white elite patriarchy.[10]

In this sense, “Breather” underscores the interesting facts that abstract constructions can carry narratives and myths, and that the content and structure organizing and articulating these narratives is precisely a modernist grid. Far from repressing language or discourse, the grid helps to trigger the narrative, as W.J.T. Mitchell has compellingly argued. Mitchell maintains that Krauss’s conclusion that the grid is an emblematic structure, hostile to language, is contradictory because emblems are, in fact, visual-verbal entities.[11] In other words, although the “antiverbal ideology” of abstraction has been embedded in the art history canon, the depiction of abstract art as a barrier between vision and language is a “myth” that needs to be acknowledged as such and challenged.[12] For Sparagana, as for Mitchell, the modern grid is a “visual machine for the generation of language” since it stimulates another kind of discourse: theory.[13]

Beyond “Breather,” all of Sparagana’s work interrogates the mediation and negotiation of history through images.[14] His “Sleeping Beauty” series (2008) accentuates and counters the reduction of body-to-surface, and the transmission of grand narratives of freedom, individualism, development, and Western superiority through mass media, specifically through fashion magazines.[15] His two series, “Between the Eyes” (2011) and “Crowds and Powder” (2013), suggest that all information received from images is mediated, and thus far from neutral; and that the impression of unlimited and immediate access to the real in the digital age is an illusion.[16] In Breather Sparagana continues this line of inquiry, theorizing modernism and challenging its claim to neutrality. As French art historian Louis Marin states “the neutral” exists within a “relationship of dynamic totality whose parts are in opposition.”[17] In this view, the neutral “appears between one and the other, neither one nor the other”—more like the “third missing term yet to come.”[18] In other words, it is a transitory state that mediates between two contraries that find equilibrium within it.[19] However, according to Marin, neutrality produces “a paradoxical idea of a part of a whole, but [a part] outside of the whole”—making it, in the end, unattainable.[20]

Thus, undermining the authority of the received mythology of the comic book, “Breather” liberates the viewer from the embedded ideology of the comics and, at the same time, problematizes neutrality. Sparagana works from both inside and outside of modernism, reflecting critically, but still within modernism’s aesthetics. He utilizes the grid in a way that points to both action and discourse and to dogma and the deconstruction of dogma. In addition, by refilling this generative structure with a second layer of “content”—the various tonalities and gestural brushstrokes in a monochromatic section, the purposeful imperfections of the grid lines, and the visible traces of displaced grids left like pentimenti of previous constructions—Sparagana reminds us that grids can forever be recycled and refilled with any kind of chosen content, and that a story resides at the very core of abstraction.

[1] When in a 1954 interview, Michel Sanouillet asked Marcel Duchamp “What is your profession?” he replied, “Why are you all for classifying people? Do I know? A man, quite simply, a ‘breather.’” Marcel Duchamp’s interview by Michel Sanouillet in Les Nouvelles Littéraires, December 16, 1954 quoted in David Joselit, Infinite Regress: Marcel Duchamp, 1910-1941 (Cambridge, Mass: The MIT Press, 2001), 238. Duchamp referred to himself as a breather in numerous occasions. In an interview with Pierre Cabanne he declared, “I like breathing better than working [...] Therefore, if you wish, my art would be that of living: each second, each breath is a work which is inscribed nowhere, which is neither visual nor cerebral. It's a sort of constant euphoria.” Pierre Cabanne, Dialogues With Marcel Duchamp (Da Capo Press, 2009), 72.

[9] Krauss seems to contradict her own argument when she affirms that grids function like myths by allowing artists to embrace the spiritual. Krauss argues that the grid helped modernist artists to deal with the split between matter and spirit that had resulted from the emergence of nineteenth-century science. In this way, the “mythic power” of the grid resides in its capacity to make us think that we are dealing with materialism, science, and logic when in reality what the grid provides is a release into belief, illusion, and fiction. Krauss, “Grids,” 52-54.

[10] Clearly today, as Sparagana argues, “we are in a heightened moment of the same oppressive myth-making rhetoric with Trump.” John Sparagana in conversation with the authors on August 12, 2017. 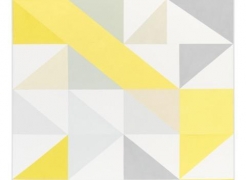