Sicardi Gallery is pleased to announce an exhibition of works on paper and paintings by members of The School of the South. The exhibition opens December 10, 2015, and includes work by Joaquín Torres-García, Julio Alpuy, José Gurvich, Francisco Matto, and Augusto Torres.

Founded in 1942 by Joaquín Torres-García (1874-1949, Uruguay), The Taller Torres-García was a workshop and school centered in Montevideo, which applied the aesthetic theories of constructivism and abstraction to a local visual vocabulary.  Like their colleagues at the Bauhaus, De Stijl, and Black Mountain College, the Taller focused its experimentation upon the integration of the arts into a unified environment. They created sculptures, paintings, ceramics, wood reliefs, murals, furniture, and architectural projects, in an unprecedented dialogue between South American indigenous and historical traditions and European modernism. The result was a new artistic language, centered in the Americas, and from outside the U.S. centers of art and culture. Indeed, Torres-García turned the map of the Americas on its head, proclaiming a new north from deep in the Southern Cone. In 1935, he writes, “…in fact, our North looks South. For us, there must not be a North, except in opposition to our South. … This correction was necessary; because of it we now know where we are.”

The exhibition Looking South includes works by Torres-García and the founding members of El Taller Torres-García. Julio Alpuy (1919-2009) was an original member of the TTG, where he taught drawing and painting. After extensive travels in South America and Europe, he re-located to New York in the 1960s. As he later recalled, Torres-García “drew us inside his own world, he gave us everything. And as he gave of himself fully, he expected us to do the same. It was through his painting that he transmitted to us universal concepts...”

Born in Lithuania, José Gurvich (1922-1997) emigrated to Uruguay as a child. He joined the Taller in 1945 and organized a ceramic studio there. The imagery in his drawings and paintings reflects his Jewish upbringing and his interest in Flemish painting, paired with Torres-García’s teachings.  Cecilia De Torres observes, “Gurvich had a natural inclination for what the Russians called “faktura,” the idea that each material generates a particular repertory of forms.”

Francisco Matto (1911-1995) joined the Taller in 1943. Inspired since the 1930s by Pre-Columbian art, including Nazca ceramics, Maya weavings, and Mapuche silver, Matto was drawn to the School of the South and its exploration of timeless symbols and mythic signs. He worked extensively as a sculptor, creating “totems” and “constructions” that shared a visual vocabulary comprised of elemental forms.

The first son of Torres-García, Augusto Torres (1913-1992) began studying the art and objects of Pre-Colombian cultures, American Plains Indians, and African tribes as a teenager in Paris. He also met many of the important members of the European avant-garde, including Pablo Picasso, Piet Mondrian, Julio González, Jean Arp, and Joan Miró.  After Torres-Garciá moved his family to Montevideo in 1934, Augusto Torres was a central member in the Taller Torres-García and became one of the most important teachers at the school, influencing generations of artists. 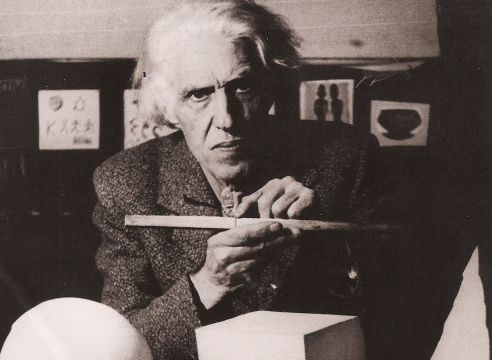